NOVELIST HAS PIG NAMED AFTER HIS BOOK

Ian McEwan comic novel has a pig named in its honour. 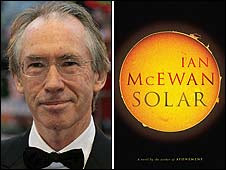 It is even better than the Booker!  McEwan's "brilliantly funny" novel, Solar, has won the Bollinger Everyman Wodehouse prize, which honours novels in the PG Wodehouse genre.
As part of the prize, a Gloucestershire Old Spot pig will be named "Solar" at the Hay Literary Festival.
McEwan, whose book tells the comic tale of a Nobel prize-winning physicist who gets the chance to save the world from environmental disaster, will also scoop a jeroboam of champagne and a set of PG Wodehouse books.
Posted by World of the Written Word at 9:43 AM
Email ThisBlogThis!Share to TwitterShare to FacebookShare to Pinterest

Makes me wonder how many parents of girls named Charlotte were inspired by E.B. White.