MARK TWAIN SPEAKS FROM BEYOND THE CURTAIN

That seance for the anniversary of Mark Twain's death (see earlier post) must have worked: Mark Twain's humungous memoir is going to hit the printed page. 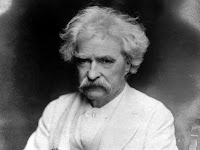 Guy Adams, writing for The Independent & The Independent on Sunday, confides that the great American satirist and humorist wrote an autobiography, complete with instructions to keep it quiet for a whole centrury . . . which us up!

The words which are finally going to be published, he assures us, are "extensive, outspoken and revelatory."

The Great Man left behind 5,000 uneditedpages of memoirs when he died in 1910, together with handwritten notes. In November the University ofCalifornia, Berkeley, where the manuscript is in a vault, will release the first volume. The eventual trilogy will run to half a million words.

So why the 100-year-old secret?  What did he say that needed such discretion?

Perhaps he wanted to talk about politics and religion without anyone getting insulted or arguing with him.  Perhaps there were friends he preferred not to insult . . . until they were dead.

Adams knows at least some of the gossip.  A section of the memoir, according to him, "will detail his little-known but scandalous relationship with Isabel Van Kleek Lyon, who became his secretary after the death of his wife Olivia in 1904. Twain was so close to Lyon that she once bought him an electric vibrating sex toy." Four hundred pages are devoted to the heart-throbbing affair.

"Most people think Mark Twain was a sort of genteel Victorian. Well, in this document he calls her a slut and says she tried to seduce him. It's completely at odds with the impression most people have of him," says the historian Laura Trombley, who this year published a book about Lyon called Mark Twain's Other Woman. This bit of the manuscript, she asserts, "really is 400 pages of bile."

Oh dear.  In retrospect, it is a pity the poor man did not destroy his pen.
Michael Shelden, who this year published Man in White, an account of Twain's final years, says that some of his privately held views could have hurt his public image. Judging by this revelation, that puts it mildly.

November's publication is authorised by his estate, which in the absence of surviving descendants (a daughter, Clara, died in 1962, and a granddaughter Nina committed suicide in 1966) funds museums and libraries that preserve his legacy.
Posted by World of the Written Word at 6:47 PM
Email ThisBlogThis!Share to TwitterShare to FacebookShare to Pinterest