IS YOUR IDENTITY SAFE?

Lose the details attached to your banking or share-trading, and you could lose all your money. 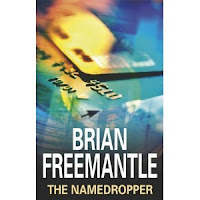 And that applies to your social security number or your birth date, too, according to Brian Freemantle's rather odd thriller, The Namedropper.  The protagonist, Harvey Jordan, specializes in stealing rich people's identities by acquiring details of their lives, including addresses and bank numbers, and then raiding their piggy-banks.

Once an honest, hardworking chap with a computer business, he reinvented himself into a goldplated crook after being cheated of everything, and is so successful at this that he can afford posh holidays in expensive seaside places in Europe.  Indulging himself in this fashion, he picks up a lovely lady (who just happens to be the wife of one of those infamous share-traders who have cost ordinary folks so much money and peace of mind).  They enjoy a brief fling before parting at the airport without exchanging addresses.  Imagine his horror, then, when he finds himself cited (under his real name) as the co-respondent in a divorce case.  In a word, he has been set up -- by a financier who does not know about his special talents.  Faced with costs that could reach millions, he wreaks revenge in the way that he knows best.

It is an appealing scenario, which is the reason I picked it up in the first place.  The characters are not particularly well drawn or likeable, and the editing is about the worst I have ever seen, with awkward sentences and inconsistencies galore, but the plot is tantalizing enough to keep the pages turning.  It is also fascinating (and perhaps a bit dangerous) to learn the details of how identity theft is carried out, and how the money can be laundered later.

A feature in today's paper reminded me that the book is based on brutal reality.  CASE EXPOSES SHOCKING SECURITY FLAWS runs the headline.  Just by a fluke, a local sharetrader found that two crucial numbers -- his CSN, or common shareholder number, and his FIN, or faster identification number -- had been purloined, and he was about to lose three million dollars. Except for one stray impulse, he would now be as broke as the rest of us.
Posted by World of the Written Word at 1:48 PM
Email ThisBlogThis!Share to TwitterShare to FacebookShare to Pinterest

The whole identity security thing is quite scary really, and something that is becoming more relevant all the time in our digitised world. It's all good fodder for novels.

Thank you for your input, Vanda -- well-put input, if I may say so! Wreaking revenge on the rich bastards (bankers, property developers, futures traders, finance company directors ...) is good fodder for novels, too. I keep on waiting for a new "Not a penny more, not a penny less."