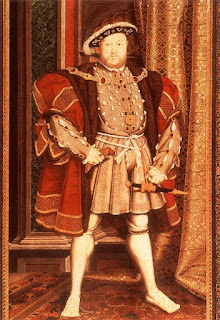 The Globe theatre is resurrecting Shakespeares' Henry VIII, and nerves, it seems, could be at stretching point.
The BBC entertainment page is running an interesting story by Tim Masters, pointing out the dangers.  A cannon fired as a special effect during a production of the play in June 1613 ignited the thatched roof of the original Globe theatre.  The playhouse burned to the ground.  Since then, theatrical groups have been reluctant to test their luck, and the play has been very rarely staged.

The jinx is the usual reason given for this, but Prof. Grace Ioppolo, lecturer in Shakespeare at the University of Reading, says genre is a problem, too.  A lot of what Shakespearean audiences had come to expect was not written into the script.  It is "a history play about celebration," without melodramatic confrontations.  It's as if Sir Peter Jackson produced a Lord of the Ring films with no battles or duels.

There is also the nagging feeling that Shakespeare might not have been the author of a lot of it.  A somewhat lesser playwright, John Fletcher, is thought to be responsibile for the creakier scenes.

Which could lead to interesting opportunities for audience interreaction.  "There are certain scenes," says the director of this new version, Mark Rosenblatt, "when you suddenly think 'this is Shakespeare' - the writing is richer."  Perhaps the applause could be louder, too.

Meantime, the jinx lurks.  The cannon shot (Act I, scene IV) has been retained, which could be asking for trouble.  During a technical rehearsal it set off a small explosion in the roof.  Hearts stopped.  Then, undoubtedly with much relieved laughter, everyone remembered that this new Globe has a 21st century sprinkler system.
Posted by World of the Written Word at 10:21 AM
Email ThisBlogThis!Share to TwitterShare to FacebookShare to Pinterest

I wonder how the Henry VIII jinx compares to the "Scottish play" curse.