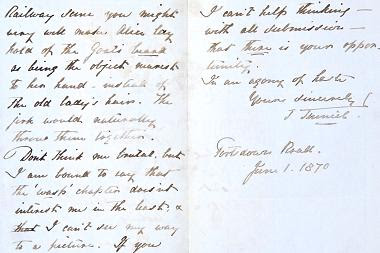 A letter from great illustrator John Tenniel to new author Lewis Carroll has shed new light on Through the Looking Glass and the relationship between two great Victorians.

The letter, held for many years by an American collector, and to be auctioned today, reveals that Lewis Carroll turned to Tenniel for advice -- and paid attention to the answer.

Dated July 1, 1870, the letter refers to what is now known as "the lost chapter" of Through the Looking Glass. This little episode was an encounter between Alice and a grumpy "wasp in a wig," and was probably a play on the saying "a bee in his bonnet."

When he read it, Tenniel was less than impressed.  The writing did not have the same sparkle as the rest.  "Don't think me brutal," he wrote, "but I am bound to say the 'Wasp' chapter doesn't interest me in the least.  I can't see my way to a picture.  If you want to shorten the book, I can't help thinking - with all submission - that there is your opportunity.  In an agony of haste.  Yours sincerely, Tenniel."

Carroll paid heed, and removed the chapter.  Galley proofs that surfaced in the 1970s revealed that it was a near-run thing, as it was included up to the last moment.  Now the letter confirms why it was removed.

The letter is expected to fetch between fifteen and twenty thousand pounds.
Posted by World of the Written Word at 11:35 AM
Email ThisBlogThis!Share to TwitterShare to FacebookShare to Pinterest