Art of the ENDEAVOUR 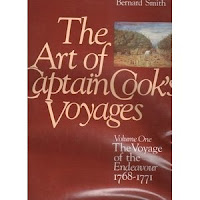 Caron Dann, in her comment on the jacket of Tupaia, Captain Cook's Polynesian Navigator (which she liked a lot), asked about Tupaia's artwork.  Now held by the British Library in a magnificent guard book (shelfmarked 15508), Tupaia's art was unrecognized for over 200 years.  Though some of it was often reproduced, because of its spontaneous, lively, and compelling nature, the name of the artist was a mystery.  In a wonderful book about the art of the Endeavour, edited by Bernard Smith and Rudiger Joppien, it was catalogued as the work of the "Artist of the Chief Mourner," because of the painter's evocative sketch of a Tahitian in mourning costume.
Then Harold Carter, the biographer of Joseph Banks, scientist on the Endeavour expedition, found a letter in the Banks collection, describing Tupaia as the man who had made a caricature of Banks himself, in a battle of wills with a Maori.  Banks holds a piece of tapa cloth in his hand, and is reaching out for a great crayfish that Maori dangles from a string.  Both are determined not to let go of the article he has to trade, until he has a firm grip on what the other is offering.  As a humorous comment on mutual lack of trust, it is hilarious.
Along with other sketches by Tupaia, it can be seen on the British Library website, images online.
And yes, I have negotiated with the British Library for permission to reproduce six of Tupaia's watercolors in the book.
Posted by World of the Written Word at 1:48 PM
Email ThisBlogThis!Share to TwitterShare to FacebookShare to Pinterest

I've seen Sydney Parkinson's art before, so it's great to see another artist's view point of the same voyage. I look forward to seeing your book about him.

Hail, Jamaica Rose! (For those not in the know, have a good look at www.noquartergiven.net/) Some of Parkinson's sketches are in guard book 15508, too, along with Sporing and Buchan. It is amazing to see famous drawings in the flesh, so to speak.