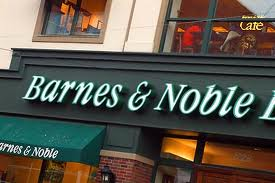 Sales in the first quarter at the company's retail stores were up, profits were up. Each of the new Nook tablets can compete with their competitors (read: Amazon and Apple). And the company, through its expansion into toys and games retail and its Nook business, is planning for the future.

As for the present, "we're actually the only place in the U.S. to get a broad assortment of books," Lynch said.

He believes that at a sub-$1 billion market cap the company is undervalued. We'll soon know more: B&N announces its second-quarter earnings on Nov. 29.

The whole theme of the interview was that Barnes & Noble is misunderstood by Wall Street.

But, says Digital Book World, what about Grub Street? For publishers it's not really about how the company is valued but whether it continues to be a going concern. With physical books continuing to be the majority of those sold, and bricks-and-mortar stores the largest single channel for book sales, the company should be viable for the foreseeable future.

The problem for Barnes & Noble might be that the future is getting less foreseeable all the time.
Posted by World of the Written Word at 11:01 AM
Email ThisBlogThis!Share to TwitterShare to FacebookShare to Pinterest