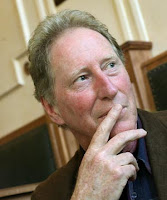 The literary award provides $75,000 and a six-month residency to work at Katherine Mansfield's old home, Villa Isola Bella, in Menton, on southern France's border with Italy.

Some time ago, I had the fun of outing McGee as Bosco. This was after his female mystery writer alter ego had won the Ngaio Marsh mystery award.  As was remarked at the time, it was odd to see it won by a ghost.

Then he fronted up with the truth.  You can see my interview with him here.  Can we look forward to a mystery set in Menton?
Posted by World of the Written Word at 9:37 AM
Email ThisBlogThis!Share to TwitterShare to FacebookShare to Pinterest