Two views of one captain

This week, the Oxford Dictionary of Biography features one of Admiral Nelson's famous Band of Brothers, Edward Riou. 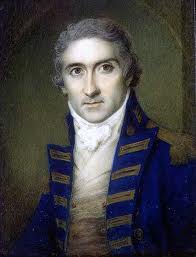 
In 1789 Riou was given command of the converted frigate Guardian, carrying twenty-five convict artisans and a full cargo of urgently needed stores, and sailed from Spithead on 8 September. On Christmas eve, thirteen days out from the Cape of Good Hope and not far from Marion Island, the Guardian struck the submerged spur of a massive iceberg which tore away her rudder and much of her keel. Half the ship's company took to the boats, but only fifteen of them survived to carry the news of the disaster back to Britain.


Riou was left with a crew of just 60, comprising the boatswain and carpenter, three midshipmen, and an unruly crew of seamen, supernumeraries, and twenty-one convicts-to work the waterlogged and rudderless ship. With superb seamanship, steering mostly with the tattered sails and keeping his exhausted and mutinous crew at the pumps by combined persuasion and force, on 21 February 1790, Riou brought the Guardian within sight of the Cape of Good Hope. She was towed into Table Bay where she was found to be damaged beyond repair, beached, and broken up. The surviving convicts (for whom Riou requested and obtained pardons) and salvaged stores were sent on to Port Jackson when the ships of the Second Fleet called at the Cape.


Riou returned to England to find that the Guardian's epic voyage had made him a popular hero.

The biography ends by relating that Riou was a tall man of unusually strong physique, with a deserved reputation for courage, resourcefulness, and devotion to duty. Then it adds that Jacob Nagle, a seaman in the Ganges, described him as a strict disciplinarian with a fanatical regard for cleanliness.


But let's look at what Nagle actually wrote.


... a rail tarter to a seaman. He made it his studdy to punish every man he could get holt of, and gloried in having the name of a villen and a terror to a seaman.  The most frivelous fault, he would make them scrape the anchors in the coldest day in winter and this was what they called the hard winter in England.  He would tie them up in the riging and gag them with a pump bolt till it frose in their mouths.  He would muster the ships company on the gangways, quarterdeck, and poop in the severest weather in winter.  If he saw the least speck of dirt on your shirt in the mustering, you was brought to the gangway and floged.  The severer the weather, the more he would have all the lower deck ports up, that the wind should fly through the vessel to keep you in motion.  There was scarcely a man in that ship but what was punished by him.

Inter alia:  Nagle managed to exchange ships, and was aboard the Sirius in the First Fleet to Botany Bay rather than the ill-fated Guardian.

Posted by World of the Written Word at 1:54 PM
Email ThisBlogThis!Share to TwitterShare to FacebookShare to Pinterest