Has anyone worked on a cruise ship? 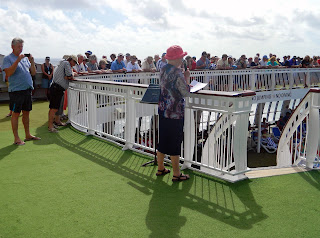 I do, for part of the year -- but it's not novel material More like a TV series.    The closest to a cruise ship novel I have read is Gwyn Griffin's "Shipmaster" -- highly recommended, but no advertisement for cruising.

Then author (Hell Around the Horn) and blogger (OldSaltBlog) Richard Spilman entered the conversation. 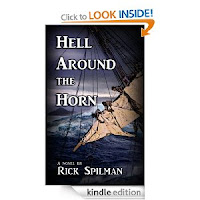 I think that a mystery writer could do a fantastic series of books on cruise ships with an insurance investigator as the designated detective. You have exotic locales, muddled legal jurisdictions, affluent vacationers, too much alcohol, sexual imbroglio, easy disposal of bodies, as well as multi-national and often underpaid crews. The crimes could range from simple disappearances, to drug smuggling, to sexual assault, to modern slavery. With all the tacky glitz of Las Vegas or Paradise Island, you could add in storms at sea, mechanical failures, fires, flooding, grounding and even the norovirus.I am not a big reader of mysteries (he went on) and I generally am not overly fond of cruise ships so I suspect that I would have a hard time maintaining my enthusiasm, but I think that there is potential for the right writer or writers.
So that is when I made my Announcement.

What do you think?  A modern series featuring murders on a cruise ship, or historical mysteries featuring an exotic Maori-Yankee detective?
Posted by World of the Written Word at 7:05 PM
Email ThisBlogThis!Share to TwitterShare to FacebookShare to Pinterest