Photo of iceberg that sank Titanic for sale

Picture of the iconic culprit up for bidding 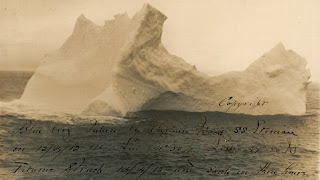 Anthony Castellano reports that an auction house is selling a black and white photo of the iceberg that experts say the Titanic struck shortly before it sank on its maiden voyage.

The photo was taken April 12, 1912, two days before “the unsinkable ship” met her demise when she hit an iceberg shortly before midnight April 14, killing 1,502 people.

The photo shows a huge iceberg with a distinctive elliptical shape. The photograph was taken by the captain of the S.S. Etonian, according to RR Auction of Amherst, N.H.

The coordinates scribbled on the photograph are not far from where the wreckage of the ship lies on the bottom of the Atlantic Ocean.

“In my professional judgment, this iceberg is the one that sunk the Titanic,” Titanic artifact collector Stanley Lehrer told the Daily Mail.

Lehrer is noted for his collections of rare Titanic artifacts that have been displayed around the world.
“The captain took the pictures because he was fascinated with the unusual shape of the iceberg. This particular iceberg had an ellipse on the top right of the iceberg,” Lehrer added.

Posted by World of the Written Word at 8:25 AM
Email ThisBlogThis!Share to TwitterShare to FacebookShare to Pinterest