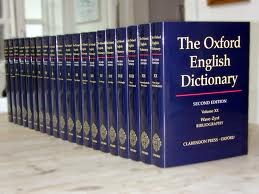 From Alison Flood in The Guardian


Robert Burchfield, an eminent former editor of the Oxford English Dictionary covertly deleted thousands of words because of their foreign origins. Worse still, he cast the blame on previous editors, according to claims in a book published this week.


Robert Burchfield's efforts to rewrite the dictionary have been uncovered by Sarah Ogilvie, a linguist, lexicographer and former editor on the OED.

Ogilvie worked for 11 years to research and write Words of the World, published by Cambridge University Press, which challenges the widely held belief that editors of the OED between 1884 and 1933 were Anglocentric Oxford dons obsessed with preserving the Queen's English, and that it was not until Robert Burchfield's four supplements, produced between 1972 and 1986, that the dictionary was opened up to the wider world.


"I observed a pattern, that actually it was the earlier editors who were dealing with words in a really enlightened way. They certainly weren't these Anglocentric, judging kind of editors ­ they were very sensitive to cultural differences and they seemed to be putting in a lot of foreign words and a lot of words from different varieties of English, which must have been amazing for that day when colonial varieties of English were just emerging," said Ogilvie.

She undertook a detailed analysis of Burchfield's supplement, comparing it with the 1933 supplement by Charles Onions and William Craigie. She found that, far from opening up the OED to foreign linguistic influences, Burchfield had deleted 17% of the "loanwords" and world English words that had been included by Onions, who included 45% more foreign words than Burchfield.


Examples of Burchfield's deleted words include balisaur, an Indian badger-like animal; the American English wake-up, a golden-winged woodpecker; boviander, the name in British Guyana for a person of mixed race living on the river banks; and danchi, a Bengali shrub. The OED is now re-evaluating words expunged by Burchfield, who died in 2004, aged 81.


"This is really shocking. If a word gets into the OED, it never leaves. If it becomes obsolete, we put a dagger beside it, but it never leaves,"  Ogilvie said.


In tracing the discrepancy back to its origins, she found that the dictionary's first editor, James Murray, in the 19th century, was harshly criticised for including contributions by correspondents from as far away as Ceylon, Mexico, and New Zealand. One reviewer wrote: "There is no surer or more fatal sign of the decay of a language than in the interpolation of barbarous terms and foreign words."


But Murray pressed on, as, later, did Onions, helped by readers from around the world.


As well as Americanisms and other regional variations in English, there were also those which entered English globally, such as typhoon, okra, abattoir, svelte and bamboo, or those restricted to a particular region, for example pak pai in Hong Kong, which is a car used illegally as a taxi.


The first version of the OED, released in 1884, contained words from all round the world, from aard-vark and aard-wolf to acacia. Murray also included the rodent, the agouti; the South American howling monkey, the alouatte; and the Philippine textile, abaca.


"If a word was used in an English context, it qualified as an English word.


After all, from the OED's beginnings, it was considered to be a dictionary of the English language, not merely a dictionary written by and for the people of England," said Ogilvie. Murray actually put out a public appeal for English speakers around the world to send him quotations including exotic varieties of English.The myth that the dictionary's early editors were Anglocentric originates, believes Ogilvie, with Burchfield himself.
Posted by World of the Written Word at 6:22 PM
Email ThisBlogThis!Share to TwitterShare to FacebookShare to Pinterest