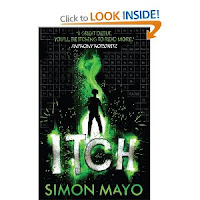 Not only is he a DJ for the BBC, but he can write well-reviewed page-turners for young adults

Itch, his debut, was promoted by none other than Anthony Horowitz, the author of the hugely popular Alex Rider series, featuring a teenaged special agent in the James Bond mode.

Meet Itch - an accidental, accident-prone hero. Science is his weapon. Elements are his gadgets. All-action adventure perfect for fans of Alex Rider and Young Bond.

Itchingham Lofte - known as Itch - is fourteen, and loves science, especially chemistry. He's also an element-hunter: he's collecting all the elements in the periodic table. Which has some interesting and rather destructive results in his bedroom.

Then, Itch makes a discovery. A new element, never seen before. At first no one believes him - but soon someone hears about the strange new rock and wants it for himself. And Itch and his family are catapulted into a breathless adventure with terrifyingly high stakes . . .


Not only has Itch flown to number one in its category on the AmazonUK list, but it has been nominated for the prestigious Carnegie Medal, which counts CS Lewis and Philip Pullman as previous winners.

The Carnegie Medal is an annual award made to the writer of an outstanding book for children.

The winner is chosen by librarians and other writers, including Frank Cottrell Boyce who won the award in 2005 and worked alongside Danny Boyle on the 2012 Olympics opening ceremony.

Chair of this year's judging panel, Karen Robinson, said: "This fantastic longlist - the largest ever - represents the high quality of children's publishing that we have here in the UK and is a testament to the enthusiasm of children's librarians across the country.

"In these difficult times it is really heartening that more librarians than ever can still find the time to nominate.

"Judges have a hard task in front of them to read and assess all these exceptional books by our specific awards criteria but their dedication and enthusiasm is second to none and we are all looking forward to the challenge," she added.

Other names on the longlist include Irish novelist Roddy Doyle who is nominated for his book, A Greyhound of a Girl.

Last year's winner was Patrick Ness who was chosen for his book, Monster Calls.

The shortlist will be announced on 19 March, with the overall winner - chosen in June - receiving a gold medal and £500 worth of books to donate to a library of their choice.

Posted by World of the Written Word at 9:22 AM
Email ThisBlogThis!Share to TwitterShare to FacebookShare to Pinterest