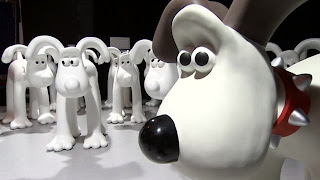 60 Gromit statues are to grace the streets of Bristol for 10 weeks next summer.

The five-foot tall (1.5m) models of the Oscar-winning animated characters will be painted by artists to raise cash for the Wallace and Gromit's Grand Appeal.

It aims to raise funds for Bristol's Children's Hospital through sponsorship and a charity auction afterwards.

Wallace and Gromit creator Nick Park said he was very pleased with the end result.

"They were made surprisingly quickly and I'm very particular exactly how Gromit looks and that he's in character," he said.

"The guy that did it made the original sculpture from the clay models in polystyrene and then a mould was made, and now they've been cast in fibreglass."

Each model will be sent out to either a national or international artist who will paint them in whatever style they choose.

I can't wait to see the result.
Posted by World of the Written Word at 8:09 AM
Email ThisBlogThis!Share to TwitterShare to FacebookShare to Pinterest

That sounds like fun, and something we could easily adapt for New Zealand - we have literary dogs of our own!

All it needs is a local Council with imagination and verve.

Oh, I spot the flaw in my argument.

LOL. A line of Hairy McLairies (sp?) would certainly beyond the imagination and verve of any council I can think of.

Good to hear from you, Dale.