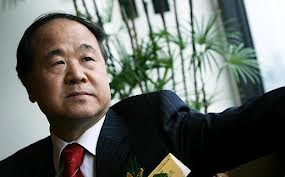 A past winner of the Nobel Prize for Literature has reportedly called this year's choice for the award, China's Mo Yan (pictured) a "catastrophe," and accused him of "celebrating censorship."

Herta Mueller, who won the prize in 2009, has told the Swedish newspaper Dagens Nyheter that she wanted to cry when she heard that Mo was the big choice. "He celebrates censorship. It's extremely upsetting," the Romania-born writer said.

Which reminds me that in October we saw a fine exhibit on the topic of "Censorship" at the Modern Art Gallery of the Queensland Art Gallery in Brisbane.  The text accompanying the exhibit was particularly well written and interesting.  Chinese art featured prominently.

Back in my teenaged years, I devoured The Grapes of Wrath, and Hemingway was up there with Steinbeck.  But I had never even heard of Mo Yan before this latest announcment, and have to confess that I hadn't heard of Mueller, either.

Who, out there, has read Nobel-ranked literature?  Here is a list of past winners, to jog your memory.

Posted by World of the Written Word at 9:51 AM
Email ThisBlogThis!Share to TwitterShare to FacebookShare to Pinterest

I've just started reaading one of his books, I purchased (downloaded) it before all of this came out. I have been reading some Chinese authors as background for my WIP. Read about this hoopla in the New York Times Review of Books. Hard for us to knock censorship when we effectively don't have it, don't know what its like. For some reason I'm reminded of a novel, Artist of the Floating World, by Kazuo Ishiguro (who also wrote Remains of the Day and Never Let Me Go) The issue in Artist of the Floating World wasn't so much censorship as propaganda. At any rate, controversy over books and literary prizes is a good thing.

Once you have read it, would you write a guest review? That would be wonderful.