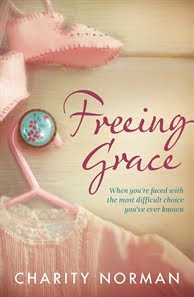 
An English-born African teenager gives birth and then flees, terrified by what is happening to her body, to be almost instantly killed by a drug-crazed driver. Her beautiful mixed-race baby, Grace Serenity, is all set to be adopted by clergyman David Edmunds and his beautiful English-born African wife, Leila, both desperately in love with each other, but equally desperate for a child.

It seems the sensible solution. The baby’s father, Matt, a pot-smoking seventeen-year-old school dropout, is terminally depressed because an accident has banned him from rugby—“the game they play in heaven.” On his weekly parental visits to the social welfare home, however, he becomes besotted with Grace. This is where the crazy rules of government Social Welfare come into play—as the parent, he has the right to keep her, if his mother can be persuaded to leave her lover and their idyll in Africa, rejoin her deeply dysfunctional family, and take on the role of caring grandmother.

Jake Kelly, a rugby-playing New Zealander who has just quit a London job that made him pots of money, is co-opted to fly out to Nigeria to fetch the errant mother, Deborah. Stunned by sun and scenery, bemused by the obvious devotion of the lovers, he is unconditionally amazed when she agrees. So he flies back to foggy England with Deborah, and the comedy begins.

And it is a comedy. Most of the vividly drawn characters who swarm through this rich book, from the feckless Jake to Imogen, the well-intentioned social worker who is terrified of her boss and tied up with constricting rules, are tragic to some degree, and yet I often found myself laughing out loud.

This is an astounding novel, completely engrossing, so confident, adept and assured that it is hard to believe it is a debut. It is a story about communication, and about rules that beg to be broken, but most of all it is a story about people—readily identifiable people, people you come to care about, people who live on after the last page is read. Allen & Unwin are the publishers, and it hits the New Zealand bookstores at the end of next month. Grab it, even if you have to queue.
Posted by World of the Written Word at 11:50 AM
Email ThisBlogThis!Share to TwitterShare to FacebookShare to Pinterest

Just picked this up at the library and am already enchanted! Can't believe I didn't find it sooner. As an expatriate Kiwi I usually hunt out new novels with NZ content.

Enjoy! I am sent a lot of books for review, and this is one I remember fondly.