The Woman and the Ship

Who is this woman?

And what is this ship? 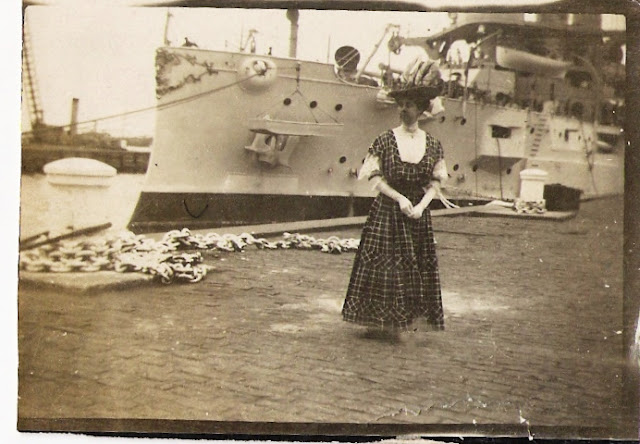 The second question was posed by Charley Seavey to the Maritime History List, marhst-l, which is administered by the Marine Museum of the Great Lakes with technical support from Queen's University at Kingston, Ontario.

"What ship is this?" he asked.

After various educated guesses from others on this list, Charley answered his own question himself..

"It turns out it is BB23, the ill fated USS Mississippi," he said, going on to speculate that it was possible that this was taken in May 1909, when the battleship cruised up the Mississippi River to demonstrate contemporary naval technology to the citizens of the south-central United States.


B23 was sold to the Greek navy, along with her sister ship. They were sunk by Nazi bombers in WWII.

I was more interested in the woman. As I ruminated to the list, There is something very odd about her outfit. She has a formal blouse and gloves, and a pinafore day dress over the blouse, with odd bits of lace embellishment. The feathered hat doesn't seem to fit the picture, either.  It's a mixture of daytime and evening, formal and casual.

I wondered if it was made up for a postcard.  Or maybe, I thought, she was a captain's wife with an odd collection of clothes in her luggage.  The pinafore dress is shortened, which was common with captains' wives.

"Any idea who she was?" I asked, adding, "The ship was christened by Mabel Clare Money."


"I also just realized I can't see her feet- I wonder if maybe there is some kind of early photoshopping going on here. Anyway I am going to forward Joan's message to a fashionista friend of mine and see what he think."
Well, the fashionista friend was fascinated.

"Not photoshop," he said; "just a slip or petticoat or underdress with a wider skirt than was usual at this period. The shadow goes with her feet. I learned from the Kyoto Institute of Fashion that hems were not always trailing behind except in reception gowns, and tht clothes were quite practical in the 1890-1910 period in allowing women to walk without dirtying the hem. The shoes could be seen. That hat is over the top.  I've seen things like it from about 1896, but I'll dig around in hat history.
"Thanks for the thrill. I wish I knew who she was."
Well, I wondered who she was, too.  So I hunted down a picture of the woman who christened the ship, Mabel Clare Money.  And here she is: 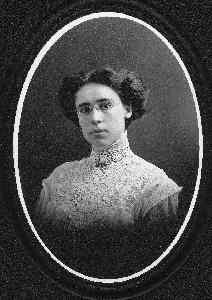 Same woman? What do you think?

Posted by World of the Written Word at 1:45 PM
Email ThisBlogThis!Share to TwitterShare to FacebookShare to Pinterest

I would think it is the same woman and would suggest that the photgraphic session (unusual in those days) was on the same occasion (hair looks identical) and the pinaphore was added to wear on the wharf over the same elegant lace blouse. Just a suggestion.

I would think it is the same woman and would suggest that the photgraphic session (unusual in those days) was on the same occasion (hair looks identical) and the pinaphore was added to wear on the wharf over the same elegant lace blouse. Just a suggestion.

More than likely, the woman in photographs look to have a similar mouth and lower facial features.

The idea of a protective pinnie is a good one -- the wharf would have been pretty dirty. Isn't the christening at the time the ship is launched, though? Before she is properly fitted out? I know that sailing ships were launched unrigged, and imagine that the same applied to steamships.

I love this sort of research. Well done. I'm going to tweet this out.

I'd love to know what tweets you get back.