Just to confuse my American readers ... 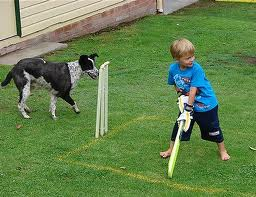 It is summer in New Zealand (or supposed to be, though the weatherman doesn't appear to know it), which means backyard cricket time.

Backyard cricket has stumps, a bat (maybe even two bats), and a ball, but otherwise the resemblance to the real stuff is very superficial.

But, as the Dominion Post points out, it does have rules.  And here they are.

Six and out. Hitting the ball over the fence, onto the roof, into a hedge, or some other area where it is hard to retrieve the ball, counts as six runs, and the batsman is out.  The same applies if you are on board ship and you hit the ball into the sea.

One hand, one bounce.  The batsman can be called out if a fielder catches it with one hand after only one bounce.  Two bounces, and it doesn't count.

Tip-and-Run.  If the batsman hits the ball, he, she or it must run, regardless of how far the ball flies.  This, incidentally, is the rule that causes the most arguments on the backyard pitch.

Hit-and-roll.  This is a new rule, that should add a lot of fun. It happens when a fielder stops a ball.  The batsman must lay the bat down on the ground, facing the fielder.  The fielder then bowls the ball at the bat.  If the ball hits the bat, the batsman is out, and the fielder takes the batsman's place.

Changing the rules.  Rules can only be changed by the oldest and/or bossiest person on the pitch.

Automatic wicketkeeper. Any handy fence or hedge.  Though a rubbish bin will do, at a pinch.

Dogs.  Dogs do not bowl or bat.  But they make very good fielders.  Or wicketkeepers, if you lack an automatic one.
Posted by World of the Written Word at 12:02 PM
Email ThisBlogThis!Share to TwitterShare to FacebookShare to Pinterest

What's the law that covers the dog knocking the bails off the wickets? :-)

Ron said, it depends on if the dog has the ball in his or her mouth. If it is (and especially if the dog is the wicketkeeper), the batsman is out. The flick of an over-excited tail doesn't count. :)