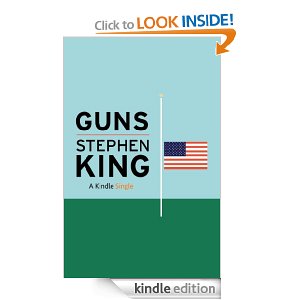 GalleyCat on mediabistro.com reports that Stephen King has published a 99-cent Kindle single -- on guns.

Stephen King has published a 99-cent Kindle Single called “Guns,” a short essay about gun violence in America that “constructs his argument for what can and should be done.”

In the essay, King wrote frankly about Rage, a novel he released under the pen name Richard Bachman about a boy who takes a high school classroom hostage with a gun.

Four different teenagers cited the book after attacks on their schools and King decided to remove the book from publication.

He explained in his new Kindle Single:


My book did not break [these teenagers], or turn them into killers; they found something in my book that spoke to them because they were already broken. Yet I did see Rage as a possible accelerant, which is why I pulled it from sale. You don’t leave a can of gasoline where a boy with firebug tendencies can lay hands on it.

Posted by World of the Written Word at 11:04 AM
Email ThisBlogThis!Share to TwitterShare to FacebookShare to Pinterest