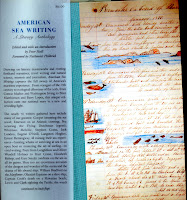 Linda Collison, author of sea-adventures about a female sailor, Barbados Bound (aka Star-Crossed) and Surgeon's Mate, posted a note on the facebook page "All things nautical" saying that she had made a happy buy.


"I bought this used (but new) for less than five dollars," she wrote.  "A great bedside book that illustrates America's maritime experience."
I was delighted to see this, as contributing to this collection was one of the nicest times in my editing experience.  Originally, I was contacted to suggest quotations from women at sea.  I remember sending samples of Mary Brewster, wife of the captain of the whaleship Tiger, who left journals I had the privilege of editing for Mystic Seaport, which were published in a grand volume called She Was a Sister Sailor. I also sent in long extracts from the amazing journals kept by Mary Rowland, wife of Henry Rowland of Setauket, Long Island, who sailed with him on the brig Thomas W. Rowland on increasingly distant voyages during their 24-year marriage.
Mrs. Rowland was the Mary who was chosen by the editors.  The quotations that were published were from the journal she kept on her fourth voyage, which began in October 1855. With her two small daughters, she experienced not just the up-and-down life on a relatively small craft at sea, but the exotic port of New Orleans.
Included is a quote I often repeat to audiences, just to watch their horrified faces, and know that shivers are crawling up their spines ...
And now besides these plagues we have still other ones on board, white crawling worms about an inch long come out of the cargo of figs and raisins and large numbers make their appearance in the Cabin and more particularly in my room. They keep hid during the day time and like the Cockroaches & musketoes make their Debut at night, they crawl up on the ceiling overhead and then fall down in a short time but Oh dear they like to hide in my mattress best of all places ....
There are lots of great stories in this wonderful volume.  If you see it -- even if the price is more than five dollars -- it's a steal.
Posted by World of the Written Word at 9:45 AM
Email ThisBlogThis!Share to TwitterShare to FacebookShare to Pinterest

Joan, I was pleased to see you were quoted in the introduction to the chapter from Mary Rowlett's logbook. Your work has been a great source of inspiration and knowledge in my study of women at sea in the age of sail. I'm enjoying this anthology, a sampling of American Sea Writing. Along with some of my old favorites are some gems I've never read.