Who will Harry Bosch marry? 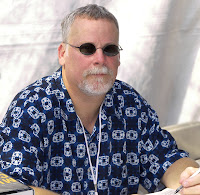 , the last mega-seller by Michael Connolly (pictured), I was agog to learn more about Harry Bosch's dramatically changed life, and couldn't wait for the next book to come out.

Let me explain.  Up to the tragic moment the mother of his only child was shot to death, Harry Bosch, homicide detective, specialist in cold cases, worked 27/7.  That is, except for once or twice a year, when he flew to Hongkong to spend time with his daughter, or took holiday leave to host her in Los Angeles.  I sometimes wondered how he did it on a policeman's pay, but he managed to give her lots of presents and other treats, and they built up what seemed a lovely relationship, with lots of texting and cellphone videos.

At the end of the Hongkong adventure, however, Bosch is suddenly a single father, in sole control and support of a fourteen-year-old daughter, who is traumatized by recent events.  It's a situation thousands of men (and women) can relate to -- he's in total control and yet totally vulnerable, having to do the tough stuff as well as the happy stuff.  Somehow he has to work fatherly interest and 24-hour support of a teenager into his action-packed life.  How the devil is he going to do it?

So I bought the next book, The Reversal

, with huge expectations.  Now, I've finished the dratted thing (a long and rather bafflingly inconclusive court trial), and am not a jot the wiser. I don't even know the girl any better than I did.  She is turning into the problem that Harry expected, but he has done absolutely nothing about it.  Instead, he organizes babysitters.

So I am handing out advice to the creator of Harry Bosch.  Marry him off.  Not for love, but for convenience.  It has happened thousands of times before, believe me (and has provided plots for hundreds of romance writers, too).

Indeed, it was quite common for whaling captains to arrive home after years-long voyages to find their whole families dead of some ghastly epidemic.  That was bad enough.  Worse still was when small children had survived the keeper of the domestic hearth.  The only solution was to provide them with a stepmother -- fast, as there were only weeks between voyages.

Sometimes it turned out well.  Captain Charles Fisher married the beautiful Parnell, and carried her off to sea, and they got along very nicely indeed, despite her constant seasickness and the 30-year difference in their ages.  And the fact that her stepson turned out to be a crook.

There's a soap opera there, Mr. Connolly, wonderful fodder for fascinating background to the life of your aging cop.  Take my advice, and use it.
Posted by World of the Written Word at 9:15 AM
Email ThisBlogThis!Share to TwitterShare to FacebookShare to Pinterest

Joan I whole heartily agree with you Harry should marry it only makes sense,well Rachel made an appearance recently he once loved her,but she is living with that awful journalist.I'm free and have been in love with Harry for years,but then I won't move to Los Angeles,Maddie needs a mother figure not a baby sitter.I look forward to that character being introduced very soon
Kay O'Sullivan

Well, Kay O'Sullivan, you sound the sensible sort who would be the ideal Mrs. Bosch. I can perfectly understand your excuse, as LA is hardly enticing (though Westwood, Harry's stamping ground, is rather nice, with a very good art museum). I wondered about the vice-principal who is being so useful in Harry's life right now, though I can't visualize her, and can't even remember her name.