The BBC entertainment news announces that the winner of the Literary Review's bad sex in fiction award is Rowan Somerville, for steamy passages in his book, The Shape of Her.

Among the deathless sentences that attracted the attention of the judges was the line: "She released his hair from her fingers and twisted onto her belly like a fish flipping itself."

Accepting the accolade, Somerville said, "There is nothing more English than bad sex, so on behalf of the entire nation, I thank you." 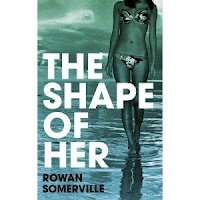 Alastair Campbell, one-time Blair's spin doctor, was another nomination for an "embarrassing passage of sexual description" in his novel, Maya. However, the judges felt that his open enthusiasm for winning the prize was not in keeping with the aim of the competition, which is "to draw attention to the crude, tasteless, often perfunctory use of redundant passages of sexual description in the modern novel."
Tut, tut, Mr. Campbell.  Fame at all costs?  Any publicity is good publicity, even bad publicity?
Other contenders were Jonathan Franzen's Freedom (I wonder if Oprah will remark on that, when he appears on her show), and another critically acclaimed novel, The Slap, by Christos Tsiolkas.
The BBC did not describe their reactions to the dubious honor.
Posted by World of the Written Word at 9:20 AM
Email ThisBlogThis!Share to TwitterShare to FacebookShare to Pinterest

Franzen was robbed. From the sample I read his writing about sex was far more execrable, not to mention, excremental, than Somerville's efforts which were not really all that bad. OK, they were that bad, but not compared to Frazen.

Here is the Guardian article which quotes the "naughty bits."