'Tis the season for odd headlines 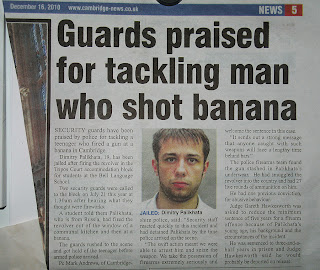 Or else the so-called silly season has started really early.  The annual best and worst lists of books, television programmes, films, DVDs or what-have-you have been succeeded by frivolous quotes and headlines.  The latest was sent to me by a friend in Cambridge, England.

To summarize, a Russian student has been sentenced to three and one-half years in an English prison for shooting a banana in what appears to have been a drunken spree in the student accommodation block of Bell Language School.  Dimitry Palikhata, 19, was subdued by security staff at about 1:30 am on July 21 after firing a revolver out of a window, and then aiming another sniper shot at a banana.

It may seem a rather excessive sentence, but what must be borne in mind is that Palikhata had smuggled the revolver into the country, plus at least 29 live rounds of ammunition.

Tut, tut, security staff at whatever airport he arrived.  They don't deserve the praise handed out to the brave and quick-thinking guards at the language school.
Posted by World of the Written Word at 10:15 AM
Email ThisBlogThis!Share to TwitterShare to FacebookShare to Pinterest