So, the New York Times has produced the usual controversial list of the 100 most notable books of the year.

All these lists are fodder for argument, as anyone can tell in an instant by looking at the comments on the NYT books blog.  As Omnimystery News comments, there are only two mysteries in this collection of titles, which seems a mystery in itself, considering the huge popularity of the genre. 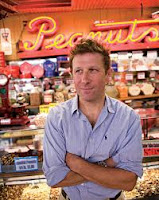 One is the last of the mega-selling Millenium series, Stieg Larsson's The Girl Who Kicked the Hornet's Nest, which I personally thought an awful book.  I've even forgotten the protagonist's name, which is a sign in itself, but I remember I spent most of the time trying to fathom her motives for treating that nice journalist so shockingly badly, before I gave up and gave the book away.
The second is a book I have never heard of, and must track down.  It is Mr Peanut, by Adam Ross (pictured).  The very thought of using a real life person who was accused and exonerated of murder -- osteopath Sam Sheppard -- as a major character is intriguing.
Posted by World of the Written Word at 9:43 AM
Email ThisBlogThis!Share to TwitterShare to FacebookShare to Pinterest