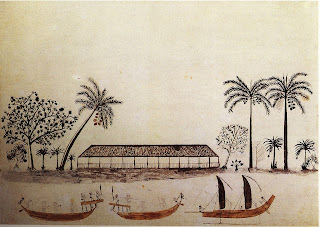 Author of maritime histories and the Wiki Coffin nautical mysteries, Druett resurrects a figure encountered on Tahiti by eighteenth-century British explorers Samuel Wallis, James Cook, and botanist Joseph Banks. Named Tupaia, he was recorded in the visitors' journals and in several self-portraits reproduced in this book, sources that Druett reinforces with Polynesian oral tradition to portray what manner of man he was. About 40 years old, he had fled to Tahiti after a war between his native island of Raiatea and attackers from Bora Bora. When Wallis dropped anchor in 1767, he gradually grasped Tupaia's significant status in incidents of parlay between the British and Tahitians, in which Tupaia emerged as intermediary, translator, and explicator of Polynesian society. At Cook's arrival in 1769, Tupaia's talents were remembered. Druett recounts the advantage the British took of them, even taking Tupaia on board for the continuation of Cook's voyage to New Zealand, Australia, and Java, where Tupaia died after falling ill. The only biography of Tupaia, Druett's astute portrait vitally contributes to annals of exploration and cultural contact."
-- Gilbert Taylor, Booklist.
Posted by World of the Written Word at 9:08 AM
Email ThisBlogThis!Share to TwitterShare to FacebookShare to Pinterest

thank you! An eminently quotable last line -- the hallmark of an expert reviewer.