THE IDENTITY BEHIND ALIX BOSCO?

We haven't heard from Spymouse for a while, but lo, my sleuth responded to my last post about the mysterious anonymity of the winner of the Ngaio Marsh Award.  And it seems my feeling that television scriptwriting is a pertinent clue just might be right on the mark.

"Think about Greg McGee," the sagacious rodent whispered, and pointed me to the embedded story, which appeared in the Sunday Star Times.

McGee, for all you American readers, is the writer of Foreskin's Lament, the 1980 rugby-based play that electrified New Zealand, and made its author famous at the age of thirty.

Like Mascagni (think "opera"), he probably felt as if he had been crowned before he was king.  He was facing a helluva hurdle for the rest of his writing life.

The SST story provides further corroborating evidence.  McGee (currently 58) is "tall, hefty, and modest, even perhaps a bit shy.  Certainly he doesn't like his photo taken," the writer confides.  However, though the day is cold, "the pub in Auckland's Ponsonby is warm, and soon he relaxes."

This is when the photo -- fingertips to lips, in suitably mysterious fashion -- was taken.

It is also interesting that as a child McGee was fascinated by the grotesque photos in his mother's nursing manual.

McGee is certainly a successful TV script writer -- he created or co-created  the hit series Street Legal, and was the writer for the award-winning Erebus, the Aftermath.

A conclusive argument?  Or is Spymouse only guessing? 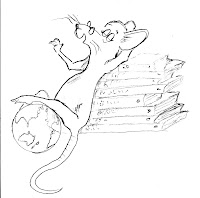 Posted by World of the Written Word at 2:18 PM
Email ThisBlogThis!Share to TwitterShare to FacebookShare to Pinterest