The girl behind the 50-day odyssey

The face that launched a stolen dinghy 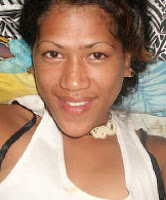 Her name is not Helen (as of Troy), and no literary agent, author, or publisher's representative will rush to Fakaofo atoll in the south Pacific, hot to create the next bestseller, but her story is as classic as a legend from ancient Greece.
Anita Iasona (pictured) could be the heroine of an enduring myth.
Back when New Zealand -- with the rest of the world -- was stricken by the tragic events in the Pike River mine, an inspirational story crept into the press.  Three boys who had been adrift in a dinghy for 50 days were miraculously retrieved from a watery grave by the New Zealand tuna boat San Nikanau, which was sailing hundreds of miles off the normal course.
The three teenagers looked sheepish as they were hoisted on board -- and well they might, for they were caught in the consequences of a remarkably silly venture.
As reported by the Dominion Post of Wellington, Filo Filo, Samuelu Peleha, and Etueni Nasau (none of them old enough to have a licence to drive a car), had sailed from Tokelau's Atafu Island on October 5, in a stolen boat and fueled with booze, heading for Fakaofo atoll and love.
It was just a day's boat-ride away, and they had a couple of sacks of coconuts, a crate of beer, and a spare fuel tank.  Sweet.
But the motor broke down.  They drifted 1300 kilometres.  The spare fuel was of no use.  One would guess the beer went first.  Then they survived on the coconuts and a snared seagull or two.  Meanwhile, in their home island, the people waited, lost hope, gave up, and held a memorial service.  In the atoll where they were headed, a pretty young girl thought she had lost them "forever."
The lad she had particularly in mind was Filo.  "He was so good looking," she said.  They had connected at an inter-island sports event.  They had spent the sports week "talking -- and kissing."
No wonder, perhaps, that Filo, aided by his friends, had stolen the dinghy to be with her again.
Filo and his mates, island-hopping since their rescue, courtesy of various authorities, have got as far as Samoa, and are now waiting for the next inter-island freighter to Tokelau.  Meantime, they are connecting with Anita by facebook.
Posted by World of the Written Word at 9:09 PM
Email ThisBlogThis!Share to TwitterShare to FacebookShare to Pinterest