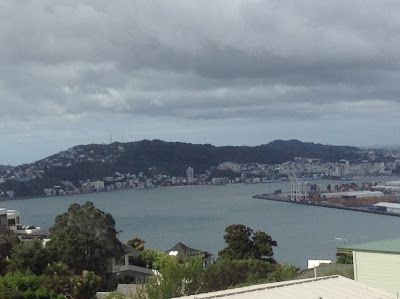 It is so strange to look out the window and see the harbor so empty.  And who knows when it will reopen?

A massive double-earthquake hit the country just after midnight, with many after shocks.  It has affected everything, it seems -- though I still hear the occasional plane overhead, so the newly refurbished airport is presumably OK.

Meanwhile the ferry passenger bridge in Wellington had been swept away after earlier sustaining damage.

"All of our ferry sailing have been put on hold. We have one ferry that moored just out of Picton with just a few passengers on board while we complete some sections of the port side infrastructure both at Picton and Wellington," KiwiRail group general manager of network services Todd Moyle told RNZ.

The Kaiarahi had left Wellington and was coming into Picton just as the earthquake struck
A passenger on board the ship, who did not want to be named, said they were due into Picton at 11.45pm on Sunday night.

But a decision was made to abort docking the ship after the massive quake hit North Canterbury early on Monday, triggering a tsunami alert for all coastal areas of New Zealand and many aftershocks throughout the country.

Posted by World of the Written Word at 10:07 AM
Email ThisBlogThis!Share to TwitterShare to FacebookShare to Pinterest

Glad you are okay, Joan. Thanks for posting.