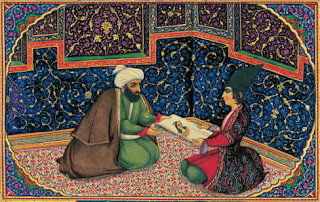 I adore my digital radio.

I can listen with perfect sound to any of thousands of radio stations throughout the world.  Apart from National Radio New Zealand, where I catch the local news and commentary, my favorite is WETA Classical, broadcast out of Washington, DC.

It is Thanksgiving Day over there, and the last day of their annual Classical Countdown, where they play listeners' choices, in order.  We have something similar here in New Zealand, at New Year, but I listen to it only out of curiosity, as they play frustratingly short extracts of each selection.  WETA Classical, bless them, play the whole of each and every wonderful piece.

Beethoven features prominently -- and I wonder if Number One will be the Choral Symphony, (symphony number nine), as it was last year.  So far I have heard two symphonies, the deathless Moonlight sonata, and the lovely chamber trio, all with places in the one hundred.  Symphony Seven was Number Five in the popularity poll.

Number Three, somewhat to my surprise was Rimsky-Korsakov's Scheherazade.  When I meditated aloud that it was a bit of an old warhorse, Ron said he likes it.  And, obviously, thousands of American listeners share his taste.

And I shouldn't deride.  The tunes are good, and the lady it commemorates was the originator of the cliffhanger.

We all know the story as The Thousand and One Nights, or, more simply, The Arabian Nights.  How a Sultan by the name of Shahryar was betrayed by an adulterous wife, so, after slaying her, he vowed to sleep with a virgin each night, and slay the poor lass next morning, to make sure it never happened again.

Then, he encountered the vizier's daughter.  Scheherazade.  And the arrangement for the fatal night was made.  But Scheherazade had a strong and unusual sense of self-preservation.  As the translator, Sir Richard Burton (not the actor), put it:

"Scheherazade had perused the books, annals and legends of preceding Kings, and the stories, examples and instances of bygone men and things; indeed it was said that she had collected a thousand books of histories relating to antique races and departed rulers. She had perused the works of the poets and knew them by heart; she had studied philosophy and the sciences, arts and accomplishments; and she was pleasant and polite, wise and witty, well read and well bred."

And she plotted how to put all this lore to good use.  She begged the favor of the presence of her beloved sister, Dunyazade, in the bed chamber, and Dunyazade was prompted to ask Scheherazade for a bedtime tale.  And as the sultan listened to the yarn, he became engrossed.  In modern parlance, it was a page-turner. But then, in the middle, at the most exciting part, Scheherazade stopped.  She would finish the story, she said, the next night.

And so her life was spared until dusk fell again.  Prompted by both the king and her sister, Scheherazade finished the yarn -- and then started another one, which she left incomplete in just the same way.  And thus 1001 nights passed, during which time the sultan had fallen in love.   He married her, and made her his queen.  And so ends the tale of the Arabian Nights

And the cliffhanger was introduced to literature, along with Sindbad the Sailor, flying carpets, and bottled genies.

Did Scheherazade really exist? Unfortunately, not.  Her story is a frame for a collection of tales, gathered over many centuries by storytellers over Asia and North Africa.  But the wise lady lives, in literature, lore -- and music.

Posted by World of the Written Word at 1:44 PM
Email ThisBlogThis!Share to TwitterShare to FacebookShare to Pinterest