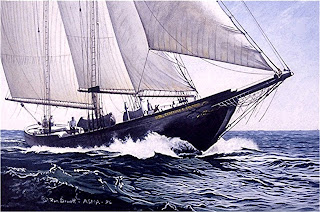 All kinds of exciting maritime events happened in Canada on 29 December ....

1943 - Frigate HMCS Montreal arrived Halifax from builder Montreal PQ
1943 - Corvette HMCS North Bay arrived Halifax from builder Collingwood ON
1943 - HMCS Mayflower, a Flower-class corvette, commenced a refit at Norfolk
VA. Many Canadian and British warships were repaired and refitted in the US,
and at Norfolk in particular. British and Canadian shipyards were overloaded
with repair work, to the detriment of many new construction programs.
Chronic shortages of new technology items in Canada also dictated that much
upgrading work had to be done in the US or in the U.K. At a time when the US
was producing modern destroyer-escorts at the rate of one every 20 days and
with manning shortages for newly constructed Canadian warships reaching
crisis proportions, putting such effort into refitting a ship of marginal
value was, to say the least, questionable
1944 - Frigate HMCS Sussexvale commissioned
1944 - Destroyer HMCS Qu'Appelle arrived Pictou NS for refit
1944 - Tug HMCS Johnville assigned to Gaspe PQ
1944 - Frigates HMCS Saint John, Stormont, Port Colborne, Nene, Loch Alvie,
Monnow departed Loch Ewe with Convoy JW-62 for Kola Inlet
1945 - Frigate HMCS Coaticook paid off Esquimalt BC
1957 - Minesweepers HMCS Kentville, Nipigon, Fort William, Medicine Hat,
Kenora sold to Turkey under the US-funded NATO MDAP program. After refits in
Sydney NS, the ships were renamed Bartin, Bafra, Bodrum, Biga, and Bandirma
respectively
1985 - Destroyer HMCS Restigouche completed life extension refit Esquimalt
BC
1990 - United Nations Security Council approves resolution authorizing use
of military force unless Iraq vacates Kuwait by 15 January 1991
1994 -
http://www.marmuseum.ca/index.php/research/marhst-l-research-resources
established by the Marine Museum of the Great Lakes with the assistance of
Queens University Kingston ON

I joined the List that year, when dial-up and charges-by-the-moment were the usual thing.  There was no FaceBook, no Twitter, no easy links to maritime history -- if those links existed at all.  I still remember the excitement as the link to what we affectionally called "MarHist" worked through, and I waited to see what the wise answers to my latest question might be.

There are a lot of wise people on this list, mostly men, and invariably helpful and polite.  The membership has gone up ... and down, as other sites have competed for attention.  But there is still a core of loyal members.  Happy birthday to their participation, particular good wishes to the two  hardworking moderators, Walter Lewis, and Maurice Smith, and a bow to the generosity of the Queens University in Kingston, Ontario.

Raise a glass!
Posted by World of the Written Word at 2:55 PM
Email ThisBlogThis!Share to TwitterShare to FacebookShare to Pinterest