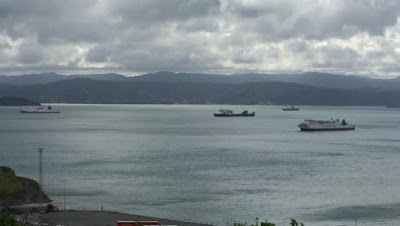 I bravely went for a walk up the hill, and surprise, surprise, I found four of the missing ferries.

They are huddled within the arms of the outer harbor, waiting for permission to dock, and battening down for the coming storm. The freighters due to be in Wellington are out at sea, pending the storm and repair of a wharf.  One is a log-carrier, which lost its load in the quake.  The harbor slumped 1.5 metres, and the tsunami that followed was 2 metres, accounting for much of the wharf damage.

Kaiarahi, which was stalled at Picton, in the north of the South Island, has finally been able to disembark her passengers (hopefully before the bar ran out of beer :))

Passengers stuck on the Kaiarahi ferry in Picton after the massive earthquake early on Monday were finally able to get off, about 12 hours later.

The Kaiarahi had left Wellington and was coming into Picton just as the 7.5 magnitude earthquake struck, leaving passengers and crew to sleep on board. The Interisland ferry was able to dock and unload passengers about 11am.

As we can see in the picture above, there are two Interislander ferries in Wellington.

The Kaitaki and Aratere ferries were still anchored in Wellington Harbour, but the Kaitaki may sail later today, KiwiRail said. However, weather warnings could still hamper sailings.

The other two are Bluebridge ferries– the Strait Feronia and the Straitsman -- which carry freight as well as some passengers.


Posted by World of the Written Word at 2:06 PM
Email ThisBlogThis!Share to TwitterShare to FacebookShare to Pinterest