from the island of Martha's Vineyard 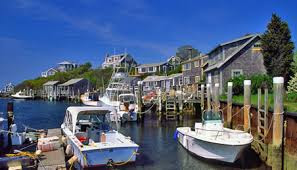 Learning to Let a Woman Lead

Early one morning last August, I was gradually becoming aware that the energy outside my little cabin was changing, building as the traffic went from an occasional car to a steady stream. My house sits in a dell by the side of the road, six-tenths of a mile from the Chilmark Community Center where hundreds of folks from all over the world were lining up for the annual Chilmark Road Race, getting their numbers, doing their stretches, drinking their last sips of bottled water before the countdown began.
'
Even though this annual summer highlight takes place right in my neighborhood, I have to admit that was the first time I had attended the race since my now 47-year-old son was 12. Our cottage was new to us then, as was the Island, but it was obvious from the first that running the race was the in thing to do. So run I did, 3.1 miles past stonewalls marking meadows where sheep grazed and where farms selling produce sprouted handwritten signs like mushrooms after the rain. I remember mentally preparing a clever quote about what I would say to the waiting reporters about what it felt like to come in last. To force my brain to focus on something other than the pain in my hip, I planned my son’s bar mitzvah. There would be round tables in a field with red-and-white checked tablecloths, a rowboat full of iced wine and beer, and that smoky tang of barbecue that would permeate my new town. That fantasy got me up the last hill.

Thirty-one years later, I felt something else in the air besides the usual excitement of a competition. The 2016 Chilmark Road Race was happening during the 2016 presidential race on an Island where we have become an oasis for both the Clintons and the Obamas. Most of us have caught a glimpse — as I once did — of a presidential caravan of black SUVs. Standing on the side of the road the first time I saw them, I bowed as I watched them pass. Hands clasped to my heart in a gesture of Namaste and respect, I’d hoped against hope for a glimpse of President Obama and Michelle.

I’m old enough to remember the heady days of Camelot, and before that, Eisenhower, and even before that too. My sister and I reminisced about the posters of Adlai Stevenson and Estes Kerfauver that hung on the walls of our childhood home in Hartford, Conn. We also remembered how devastated our father was when they lost. We were trained to be lefties. No surprise that from the moment I became aware of Bernie Sanders, I saw in him the men I knew growing up. I saw my Uncle Max selling blue oxford button-downs in the boys’ department at G. Fox. I saw my eighth grade math teacher, Mr. Horowitz, not to mention Dr. Reuben Gold, my orthodontist.

I was for Bernie. His record and policies seemed channeled from my leftie parents into my leftie ears. I was so disappointed that Bernie didn’t win the nomination, and my sister is still every bit as devastated over Bernie’s loss as our father once was over that long ago defeat of the Stevenson and Kerfauver ticket.

At the Chilmark Road race this year, I was a spectator under a tree near the finish line, reading articles about Hillary Clinton. My friend Barbara Lee, a woman dedicated to the advancement of women in American politics, and a friend who knew my love for Bernie, had assigned them to me.
“Just read these,” she had said.

Like Barbara, many of my friends on Martha’s Vineyard who know Hillary Clinton talk about her sensitivity, her vulnerability and her kindness.

“So why doesn’t she show these qualities?” I have argued.

“You don’t have to change how you feel about him,” Barbara said to me. “Just get informed.”

She promised that if I read every word of the seven, in-depth articles she’d handed me, she’d give me her extra ticket to the Hillary fundraiser so I could finally see for myself.

And then, under the tree, something extraordinary happened. I was no longer reading. I was crying, reeling back to my 1950s childhood and the memory of something my father had said to me when I was 13 years old, and on my way out the door to play tennis with a boy.

The crowd around me was on its feet. There was Ebba, my librarian, and over there was Freddie, my guy who delivers my wood, and Lee, my postmaster and his lovely wife. We were all standing and cheering for the woman who crossed the finish line first. And as her ponytail swung back and forth in celebration, I was sobbing. I am a good crier, tears come easily, but these were no ordinary tears. The huge gulping sobs were connected to something deep inside the girl I once was, the girl who didn’t get to run, the woman I had become, and the president I want for myself, and for my world. A woman willing to risk being unlikable in order to win.

Nancy Slonim Aronie is the author of Writing from the Heart: Tapping the Power of Your Inner Voice (Hyperion/Little Brown) and teaches the Chilmark Writing Workshop. She is a commentator for NPR.
Posted by World of the Written Word at 9:06 AM
Email ThisBlogThis!Share to TwitterShare to FacebookShare to Pinterest