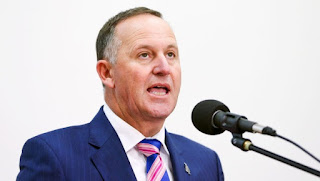 So someone picked up the phone.

And a bizarre call it was, too.

Any mention of the earthquake? Apparently not.

This is how it went.

There were a number of firsts when John Key picked up the ringing phone on his Beehive desk.

It's the first time he'd ever talked to the caller and it was the first time he'd taken a call from the palatial, sprawling, golden Penthouse on the top of Trump Tower with a commanding view of Manhattan, with the Statue of Liberty keeping guard in the distance. Donald Trump would probably rate her a four out of 10 at best, given her stern expression and a robe that does nothing for her femininity, so the further away from her the better.

But the long distance call seemed to go okay, which Key says showed Trump was very knowledgeable about what was going on which, with The Don, you can't deny. Consider the fact that in the dying hours of his campaign last week he was repeatedly saying "things are looking good" while most of the establishment thought he was barking.

He spoke fondly of his visit to God's Own 22 years ago, which is surprising, given that it was for less than a day.

But that didn't stop him from booking the presidential suite at the Hyatt to freshen up, clearly a taste of things to come, as was his foresight into what a profitable proposition a casino in Auckland would be - the reason for his stopover.

Our boffins decided this billionaire's bid didn't stack up.

It seems his admiration of one of our greatest golfers Sir Bob Charles is long held, because he waxed on about the legend when he was here and again talked a lot about the now 80 year old when he was on the blower to Key.

Then Trump came up with one of the most bizarre requests from one leader to another, give Bob a call, he suggested to Key, and give him my best regards. It's the sort of schmaltz that flows from the President-elect's puckered lips to those he likes. Of course Key, when he gets the chance, will be on the phone to Bob who lives between Canterbury and The Don's favourite state Florida.

Our PM did raise the Trans Pacific Partnership bogey with Trump, suggesting they have a fuller discussion when he gets his feet under the table.

He described Trump as very warm, and very engaging during their first ever chat, which isn't all that surprising given Key's ability to engage with cringe.

Both men have said stuff they'd prefer not to have said, although Trump has run on at the mouth so much for so long that he probably can't remember what he shouldn't have said, but whatever it was, why should he care?

It doesn't seem to have done him much harm


Posted by World of the Written Word at 6:19 PM
Email ThisBlogThis!Share to TwitterShare to FacebookShare to Pinterest