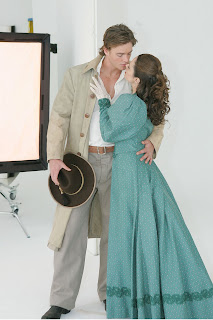 Is this a chance to express your romantic voice?

Harlequin has announced the launch of Carina Press, a digital-only publishing house that will sell directly to consumers and "operate independently of their traditional publishing businesses."

Angela James is joining the new operation as executive editor. Their call for submissions include both new works as well as "books that have been previously released in print form, but for which the author has either retained digital rights or had digital rights revert to them."

With an expected summer 2010 launch, Carina plans to issue new titles weekly. Harlequin ceo Donna Hayes says, "We expect to discover new authors and unique voices that may not be able to find homes in traditional publishing houses. It definitely gives us greater flexibility in the type of editorial we can accept from authors and offer to readers. As well, we hope to reach a new group of readers with niche editorial."Release
Posted by World of the Written Word at 8:38 AM
Email ThisBlogThis!Share to TwitterShare to FacebookShare to Pinterest