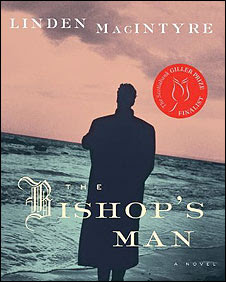 Linden MacIntyre, an investigative journalist who works for the Canadian Broadcasting Corporation, is the author of a novel about sex abuse scandals in the Catholic Church, which has won the Giller Prize.

The book, called The Bishop's Man, is dedicated to "priests and nuns struggling to do their jobs." MacIntyre believes that those jobs are made much harder because of a "failure of leadership" in the Church.
His novel tells the story of a priest who is given the task of stamping out sex abuse scandals before they hit the press. The jury said it was a "brave" novel (which sounds an understatement), "written with impressive delicacy and understanding."
The Giller Prize honors the best in Canadian fiction writing, and is worth $47,000 Canadian.
Posted by World of the Written Word at 8:18 AM
Email ThisBlogThis!Share to TwitterShare to FacebookShare to Pinterest