MS of A CHRISTMAS CAROL on display 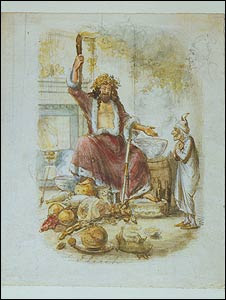 The messy, rushed manuscript of the beloved Dickens morality tale, A Christmas Carol, is on display at the Morgan Library and Museum, reports Claire Prentice in New York.
Charles Dickens scribbled the story at a frantic pace, impelled by a personal financial crisis, getting it down on paper in just six weeks. "The manuscript is a mess," says the Morgan's curator, Decian Kiely. "It's a mess because Dickens was trying to get everything down on paper really fast."
In the process, he created two absolutely unforgettable characters, Bob Cratchit and Ebenezer Scrooge. The story of Cratchit's incurable optimism and Scrooge's redemption after being visited by a series of ghosts (one pictured, right, as an illustration for the first edition), has inspired many adaptations, including pantomimes for the junior set.
The manuscript has a lot of crossing out, with inserted revisions and corrections, revealing both the writer's inner thoughts and his inspirations, making it one of the most interesting literary artifacts around. It will be on display through January 2010.
Posted by World of the Written Word at 9:39 AM
Email ThisBlogThis!Share to TwitterShare to FacebookShare to Pinterest