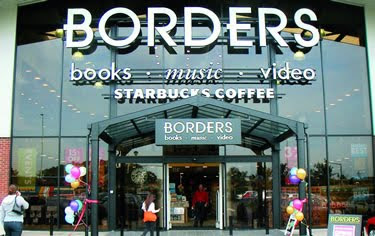 Or so says the Bookseller Magazine, echoed by Publishers Lunch.
Concerns about the fate of Borders UK rose over the past few days, as the Times declared Sunday the struggling chain is "on the verge of collapse" after a potential deal with WH Smith fell apart. Asked for comment by the Guardian, WH Smith "refused to confirm reports that it had pulled out of the deal," but the newspaper joined in warning the company "appeared to be foundering, raising fears for the future of the hard-pressed business."
The company's financial advisor Clearwater advertised "a chain of book and entertainment stores" for sale. The Times added "the lack of appetite for a takeover of the whole company means that Borders could be put into administration this week."
They say that talks are being held with other potential saviors, including Waterstone's owner HMV, but "it is thought that the companies it has approached are more interested in buying packages of stores." The Guardian says those other bidders "are only interested in buying a handful of stores" and are likely to wait for a bankruptcy filing.
Posted by World of the Written Word at 8:10 AM
Email ThisBlogThis!Share to TwitterShare to FacebookShare to Pinterest

Good. And I hope this was not a lament. A big-box bookseller gone? Maybe a little bookshop will open now. Like a little scrub pine finally allowed some sunshine now that The Thunderstorm has knocked out the Big Trees.