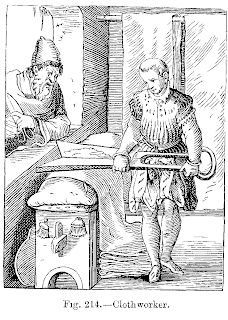 Occasionally research turns up the most wonderful tidbits of information. Unfortunately, those tidbits are usually irrelevant to the actual topic, but they make the world a really, really fascinating place for a few special moments.

This happened when I started wondering about Parkinson's paints. Parkinson, of course, was Sydney Parkinson, the natural history artist who was employed by Joseph Banks, and voyaged on the Endeavour with Captain Cook and Tupaia. In Tahiti, or so Banks related in his journal, Parkinson was forced to sit under a mosquito net while painting in the open. Because of the fascinated crowd? So he could share his craft with Tupaia (who took up art himself) in semi-private?
Nope.

It was because of the flies. Wrote Banks, "they eat the painters colours off the paper as fast as they can be laid on." Well, it was not a surprise that there were so many flies, as every nobly born Tahitian carried his personal fly-whisk. But I did start to wonder what the flies ate. They surely were not interested in the water dilutant of the water colors, Tahiti not being the desert, so it must have been the pigment.

Accordingly, I searched the web for anything about pigments and found a lively web exhibit, Pigments through the Ages. The pigments are inorganic, mostly, or so I found. Red, for instance, was mercuric sulphide, while the browns, oranges, and yellows are based on ochres. Surely the flies did not eat that! But then I found that blue came from indigo, or woad leaves, which had been fermented with . . . wait for it . . . human urine.

But there was another, even more fascinating, wrinkle. That urine had to be highly alcoholic, so the dyers prepared for the job by getting thoroughly drunk. The actual dyeing process happened on Sundays. The pieces of cloth were dunked in the tubs of alcoholic urine and left overnight, and on Mondays the hungover dyers hung them up in the air, and the cloth gradually turned bright blue.

Hence the term "Blue Monday."
Posted by World of the Written Word at 7:39 AM
Email ThisBlogThis!Share to TwitterShare to FacebookShare to Pinterest

Now, that is a really neat piece of history. Interesting that people interpret blue monday as being a knock on mondays and having to go back to work, when it appears to have nothing to do with that. What I want to know is who is the first person to have discovered that by pissing on the leaves, leaving them to soak, then dunking cloth and hanging it to dry, you get a vibrant blue color! How do people come up with these things? I wonder is this tidbit of trivia sheds any light on why in America, and perhaps other places, they call the no-alcohol-on-sunday laws "blue laws?" Great stuff, Joan. Eric (Dolin).

And the flies, Eric, the flies! Was it really the blue pigment they were after, and were they getting an alcoholic fix? Seriously, like you, I wonder how they found out about it in the first place. Were dyers habitually drunk? Or did they find that the drunken ones turned out brighter cloth than the sober set? What fun! Thanks for your post.

Being drunk may have helped the dyers cope with the stench!

They must have been jolly smelly themselves! (Or smelly as well as jolly.) And did they have blue hands? Perhaps dyeing was a very recognisable profession, but how highly rated on the social scale? Pretty low, I imagine.

Urine was used in many early industrial processes, especially round wool and leather, but I hadn't read about this one.
Other ingredients of watercolour paints might be gum arabic or gelatine, and wheat-based cornflour - that would smell like food, too.

Was Banks just guilty of sloppy reporting when he said the artist's "colours" ? Or was there another hue the flies went for as well? Do we know what the carrying medium was for his pigment?

Hi Dale -- good to hear from you. I think Banks meant "colours" when he wrote "colours," because he said it twice. He went on to relate an anecdote about what happened after they decided that "a fly trap was nesscessary [sic] to set within this to atract the vermin from eating the colours." The trap was a plate of "tarr and molasses" mixed together. It didn't work, but a Tahitian with a large sore on his backside used it as a poultice. I hope it did the trick!