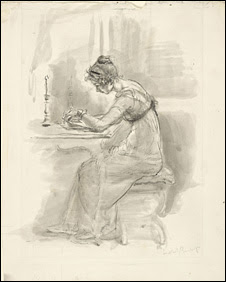 A major Jane Austen exhibition has opened in New York.

Claire Prentice, reporting for the BBC, relates that over a hundred items, including rare letters and the manuscript of a book, are now on show at the Morgan Library and Museum in Manhattan. Called "A Woman's Wit: Jane Austen's Life and Legacy," the exhibition opened on 6 November, and will run until 14 March.
Interestingly, some of the letters have pieces cut out of them, apparently having fallen victim to some censor in the past. Perhaps they were intimate details of health and other personal matters, but it is also very likely that they were cutting criticisms of Austen's fellow humans.
"Jane Austen was like a guided missile of social satire," colorfully explains Morgan curator Decian Kiely. "She was very frank which is why so many of her letters were destroyed."
Jane Austen's originality and sense of humor are also on display. A letter written to her niece for her eighth birthday has every word written backwards, to give the little girl a challenge.
Posted by World of the Written Word at 8:36 AM
Email ThisBlogThis!Share to TwitterShare to FacebookShare to Pinterest