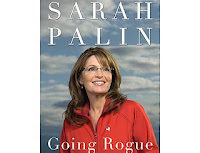 Good lord, she is going to earn out that massive advance.

Sarah Palin's Going Rogue will be Number One on the New York Times bestsellers chart this week.

Dave Itzkoff reports for the NYT that the newly released memoir sold 469,000 copies in the first week of release, shoving Names like James Patterson, Stephen King, and Dan Brown further down the ratings chart.
Palin's book had the second-best first-week sales of any memoir of a president or [vice]presidential contender, according to Nielsen BookScan. Bill Clinton's My Life sold 606,000 in the first week of release, marginally outselling his wife, Hillary Rodham Clinton, whose Living History sold 440,000 copies, and now sits at number three.
HarperCollins estimated larger sales, at about 700,000. As pointed out before in this blog, Nielsen Bookscan does not cover the entire market, because of client constraints. In this case, they did not use figures from some mass-market outlets like Wal-Mart and Sam's Club.
Posted by World of the Written Word at 7:37 AM
Email ThisBlogThis!Share to TwitterShare to FacebookShare to Pinterest