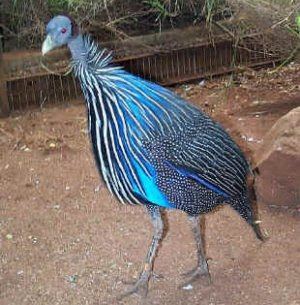 Those loyal souls who have been reading this blog since it first began may remember a mystery I posed when reading the logbook kept by Capt. Samuel Wallis of the Dolphin in 1767, during the first European "discovery" of Tahiti.

Discovering also a woman he assumed to be the "queen," (Purea, aka Oborea), he presented her with a number of things, including three galleances.

Galleances? What the heck were galleances? Some kind of fowl, from the context. I posed the theory that they were guinea fowl: see "Galleances and guinea fowl" for the entire discussion.

And I received all kinds of interesting comments and suggestions -- but now I can triumphantly declare the mystery solved. And I was right! Three guinea fowl, they were.

My evidence comes from the private journal of James Burney, who sailed on the Adventure on Cook's second expedition. It was published by the National Library of Australia in Canberra in 1975, and edited by Beverley Hooper. On page 69, Lt. Burney is in Tahiti, making the observation that "Obreea" (Purea, the so-called queen) had fallen on hard times. "Captain Wallace had given Obreea a great many things amongst which were 2 Geese - 3 Guinea Hens - a Turkey cock & Hen & a Cat - of these the Indian [Omai] on board us, gave the following account. 1 of the Geese died - the Guinea hens were Stole from her & killed - the Turkey hen had 5 young ones but th cat killd them all. the Cat who was kitten miscarried, was stole & carried away to another Island & the Turkey hen is since dead -- So unlucky has Obreea been with these presents."

Those three poor guinea hens were unlucky, too. Doubtlessly they were cooked in an earth oven and eaten. I wonder what they tasted like?

Posted by World of the Written Word at 7:47 PM
Email ThisBlogThis!Share to TwitterShare to FacebookShare to Pinterest