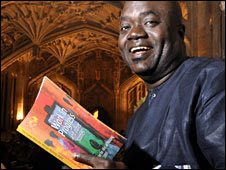 Now, here is yet another writing prize I've never heard of before, and a very worthwhile and inspiring one, too -- even if some aspects of it are odd.
It is the CAINE PRIZE (named after the actor Michael Caine, apparently because at one stage he was chairman of the Booker committee), and is awarded annually for a short story written by an African writer.

Despite that little quibble, I was delighted to read in the BBC arts and culture magazine that Mr. E.C. Osondu has scooped the award this year. The Chair of judges, New Statesman sub-editor Nana Yaa Mensah, described Mr. Osondu's story as "a tour de force describing, from a child's point of view, the dislocating experience of being a displaced person."

E.C. Osondu was born in Nigeria, worked for an advertising firm in Lagos, and then moved to New York to study creative writing at Syracuse University. He currently teaches literature at Providence Collge, Rhode Island.

The story is called Waiting, and was published in Guernicarmag.com. Read it yourself: http://www.guernicamag.com/fiction/762/waiting/ It is funny; it is shocking; it is tragic; the characters are so swiftly and surely drawn that they are unforgettable. You will come away from it changed.

Posted by World of the Written Word at 9:21 AM
Email ThisBlogThis!Share to TwitterShare to FacebookShare to Pinterest