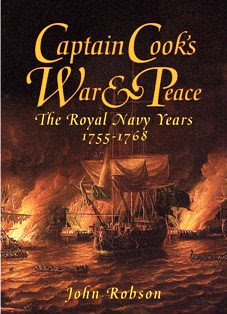 New Zealand's own expert on the life of James Cook, John Robson, has a new volume coming out in the UK, lovingly produced by Seaforth Publishing.

According to the publisher's website, this new book reveals that James Cook was chosen to lead the Endeavour expedition to the Pacific in 1768 because by that date he had become supremely and uniquely qualified for the exacting tasks of exploration.
This was a period when who you were and who you knew counted for more than ability, but Cook, through his own skills and application, rose up through the ranks of the Navy to become a remarkable seaman to whom men of influence took notice; Generals such as Wolfe and politicians like Lord Egmont took his advice and recognised his qualities.
During this period Cook added surveying, astronomical and cartographic skills to those of seamanship and navigation. He was in the thick of the action at the siege of Quebec during the Seven Years War, was the master of 400 men, and learned at first hand the need for healthy crews.
Highly readable and displaying much new research, this is an important new book for Cook scholars and armchair explorers alike.
Posted by World of the Written Word at 10:48 AM
Email ThisBlogThis!Share to TwitterShare to FacebookShare to Pinterest