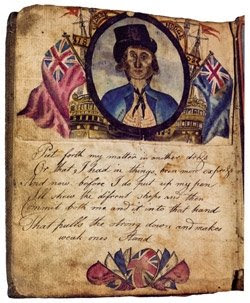 Anna Brady reports in the Antiques Trade Gazette that a treasure from the Nelson era has been sold for a record sum.
This is a very rare bird indeed -- the diary of an ordinary sailor, lavishly illustrated with his own watercolors.
Seaman George Hodge first went to sea in 1790, at the age of 13, and commenced his diary at the same time. By 1833 it had grown to 500 pages, and recorded Hodge's service in the Napoleonic wars and the American War of 1812.
Life in the forecastle was precarious in the extreme. Hodge was held twice as a prisoner of war by the French, and was press-ganged back into the navy after being released the second time.
The diary, offered with more than 600 other maritime items from a private estate, was listed for sale by Northeast Auctions in Portsmouth New Hampshire. Because of its rarity, the seaman's journal roused a great deal of interest, which was matched by the price received. Estimated at up to $50,000 it sold for $110,000.
Posted by World of the Written Word at 11:05 AM
Email ThisBlogThis!Share to TwitterShare to FacebookShare to Pinterest

will i ever get a chance to read the full diary? maybe buy a paperback version? fascinating stuff!

Thanks, Lee. As you can see if you look at the latest, you inspired a new posting. Cheers.