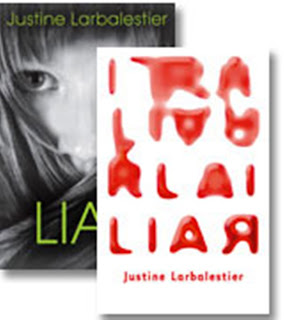 In a very interesting blog, well-traveled Australian YA author Justine Labalestier wonders why the girl pictured on the jacket of the US edition of her latest book, Liar, is white, when the protagonist is black. Curiously, too, the model on the cover has long hair which she uses to veil herself, while the lass in the story has short, bubbly hair.
Labalestier discusses the problem very rationally, I thought. First, as she points out, authors have little or no say about the picture on the jacket -- and, I add, editors don't, either, no matter how committed they are to the book. The final decision, or so I believe, belongs with the marketing department.
And it is definitely the marketing department of Labalestier's book that made the decision. She was told that a book with a black girl on the jacket would either be spurned by bookstore buyers (because black teens don't read? Please!), or, more logically, it would be moved from the YA section to the urban fiction section. Though can one imagine a book by Oprah Winfrey being shifted from the front of the store? Or a book about Naomi Sims, the famous black model, having a jacket picturing a white fashion model instead?
Allen & Unwin, who bought Australian/New Zealand rights, did a much better job. Their jacket has a spare, rather shocking look, with the title written apparently in blood. It would certainly make me pick it up and have a curious riffle through the pages. But I find it striking that they, too, chose not to show a person of color on the cover.

When they published my own Wiki Coffin books, where the hero is half-Maori, they chose to picture a white man on the cover -- and when I investigated, the model was a German! How far from Maoridom can you get? Would the books have sold much better in Australia and New Zealand with a Maori on the cover? Here, where not only is a significant ratio of the population Polynesian, but everything Pasifika is fashionable? I think so.

Justine Larbalestier is Australian, not American.

Really? My apologies to Justine! But it is fearfully hard to tell from her web site, and so I just assumed ... Thanks for the correction. Kia ora from Wellington, Joan