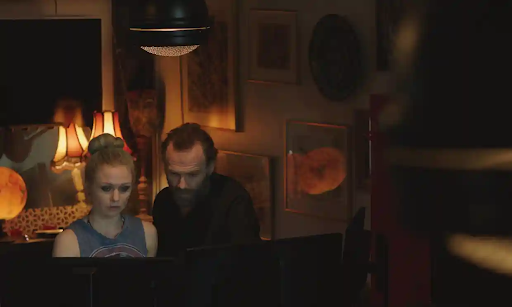 In my chase of Nordic chiller mysteries, "Case" was a natural choice, as "Trapped" was brilliant, and I wanted to know if all the Icelandic stuff was as good.

And this is definitely up there with it. "Case" has all the great cinematography, sound track, and writing that I found so compelling with "Trapped".  There are even some of the same actors.

And the acting is as brilliant.  The cast look natural (no Hollywood glamorization). They act like natural people; they even talk like natural people, though the words are in Icelandic. Gabriela, the lead detective, is so aunt-like that you expect her to smell of freshly baked scones.  Her hair is lank, her face is scarcely made up, and her clothes do nothing to hide a few extra kilos.  When the mystery gets grueling, you want to go up to her and give her a reassuring hug.

So, why my headline -- "starkers and nervous"?  Because the producers wanted to show the viewer exactly what happened, and this is a story about the deliberate sexual degradation of 14-year-old girls.  Accordingly, there is a graphic scene in a brothel where the totally naked manager is being cross-examined, and is so nervous that he fiddles with himself while he hunts for plausible answers.

Behind him, naked couples are copulating.  In most American and British dramas, this would be offensive, but here it is dramatic and telling.  Not offensive at all -- but get ready for it.  Once you are immersed in the story, it is easy to understand that the scene is necessary to the plot, just as the writers intended, and the sex and nudity are not gratuitous at all.

Only one character is a stereotype -- Logi, the washed up lawyer in Paul Newman style, who operates on booze and blunders horribly in his hunt for the truth -- but he is so well portrayed that this is eminently forgivable.  And Logi definitely does the right thing in the end, even though he is mad enough to break the law.  By doing this, he foils Gabriela, who is close to the truth herself, but her enigmatic little smile at the very end reveals what she really thinks, deep inside.

Okay, the plot. But no spoilers. A very young ballet dancer commits suicide in a Reykjavik theatre -- an interesting choice, as though it is definitely suicide, and not a murder, it looks like a public plea to the police to investigate her motive for ending her life.

And that is exactly what Gabriela -- and Logi -- set out to do.  They follow a tortuous trail that leads to a mess of corruption and depravity that lies under the surface of an apparently very virtuous city.  Teenagers are evasive, and keep changing their stories, the depths of the Dark Web are plumbed, and unexpected villains are exposed.

As in "Trapped", it is easy to get lost in the labyrinthine story, and wonder what the devil is happening.  Which makes it even more watchable, because you know exactly how Gabriela and Logi are feeling, and why they do what they do.

Posted by World of the Written Word at 10:45 AM
Email ThisBlogThis!Share to TwitterShare to FacebookShare to Pinterest