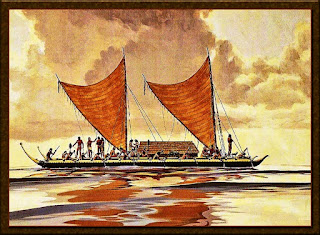 Maori are the inheritors of an impressive maritime tradition.  Their remote ancestors were skilled sailors who burst into the western Pacific from southeast Asia over 3,000 years ago, to settle the islands of Fiji.  About a thousand years before Christ, they colonized Tonga and Samoa, where Polynesian language and culture developed.  From there, men and women sailed out from this ancestral cradle, fanning out across the broad Pacific, and exploring more of the earth’s surface than anyone ever before.

This amazing feat was made possible by their evolution of the double-hulled canoe into a stable voyaging vessel, capable of freighting plants, animals, provisions, as well as people.  The big, graceful craft ranged as far east as Rapanui (Easter Island), and probably made a landfall in South America, either introducing the kumara, or carrying kumara sprouts back.

At a time when sailors in the Mediterranean were experimenting with the fore-and-aft sail, Polynesian canoes powered by lateens made the tough 4000 km voyage from the Tahitian archipelago to Hawaii, and then back again, battling cross-currents, the doldrums, and contrary trade winds.  And two hundred years before the era of Columbus, Magellan, and Drake, Polynesians crossed 2000 miles of storm-tossed ocean to the mountainous, deeply embayed islands of Aotearoa-New Zealand.

Their navigational science was astounding. Not only were they familiar with the patterns of currents, clouds and swells, and the migrations of birds, fish and whales, but they had a truly impressive knowledge of star bearings.  Great directional stars and constellations—Matariki (the Pleiades), Whetū-kura (Aldebaran), Rehua (Antares), and Te matau o Maui (the hook of Scorpio)—were as familiar to Polynesian navigators and priests as the faces of their kin.  Centuries before the crew on Coumbus’s ship shivered at the prospect of falling off the edge of the world, Polynesians knew perfectly well that the earth is round.

The ancestors were also adept at the science of acclimatisation.   It was an intrinsic part of their successful settlement of the Pacific, and involved plants and animals from as far away as New Guinea.  This was because the islands they found, though fertile, were barren. In Tahiti, for instance, there were only two edible plants — a kind of borage, and coconut. Undeterred, they introduced taro, kava, breadfruit, paper mulberry for tapa, pigs, chickens, dogs, bananas. It is almost impossible to imagine what today’s tropical paradises would have looked like without Polynesian horticultural brilliance.

They applied the same system to Aotearoa-New Zealand.  But this land was colder, heavily forested, the soil not as fertile.  Some of the cargo was lost right away.  The pigs and chickens either did not survive the voyage, or died soon after landing, and bananas, breadfruit, and coconuts failed to thrive.  There were still dogs and rats—though the rats might have been stowaways, it was possible to eat them.  Carefully nurtured sprouts of taro, yams, gourds, kumara, and paper mulberry acclimatized after a fashion, along with the Pacific ti cabbage tree with its sugary root.  But the challenge was enormous.

While the settlers were learned in the spheres of astronomy, navigation, botany, zoology, medicine, and the social sciences, big gaps in their knowledge were suddenly important.  They did not have chemistry, geology, physics, or metallurgy, for instance. That those pioneers produced a flourishing society despite these gaps is an achievement that should never be underrated.

Posted by World of the Written Word at 6:16 PM
Email ThisBlogThis!Share to TwitterShare to FacebookShare to Pinterest