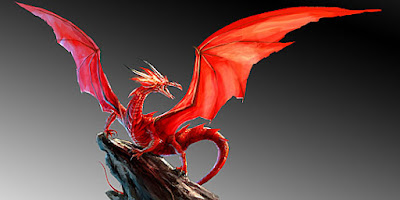 I love dragons (and collect them) and I love riddles.  The plot of my first novel, Abigail (A Love of Adventure) revolves about a riddle.

So how could I help but be charmed by pirate lady Cindy Vallar's Rumble the Dragon? 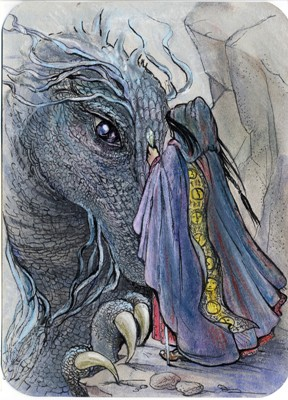 Here is an alluring excerpt:

Deep within the bowels of Cymru two caves combined to create an immense cauldron-like chamber. Striated walls ebbed and flowed into peaks and valleys like waves crashing onto the shore. The higher the walls rose, the narrower they became until shrouds of darkness concealed the ceiling. At the far end of the cauldron, a frozen river of gray, brown, and green cascaded onto a polished floor. Two alabaster pillars guarded a domed rock upon which sat an ancient and enormous dragon with graying whiskers. Age had faded the emerald green, burnished gold, and umber brown of Dragon Father’s scales, but time had failed to obscure his regal bearing or dim his keen sight.

On a tiered platform across from him sat the members of his Council. A few emitted occasional low growls, as if angered, while others uttered high-pitched whistles to show their delight. Lacking the patience of their leader, nearly all the young dragons flapped their wings, pushed and shoved each other, or shifted their weight from one foreleg to the other. With a flick of his claws and a glare through narrowed eyes, Dragon Father silenced them until they perched like stone statues.

Once every half century, he summoned dragons from the farthest reaches of the world to a confabulation. The preponderance were Great Earth Dragons, but the lesser dragons came in all shapes and sizes. Mud-caked, timid Knuckers lingered near the fringes of the gathering. Farther from the center and even shier than their cousins, the Bucca bumped around in the shadows. Chirping, mischievous Dwarf Dragons darted over and around the cauldron, annoying one and all. Moth Dragons, with furry manes and razor-sharp teeth, nestled in the clefts away from the light. Black-striped Tazzy Dragons warbled from pillars or stalagmites, while their young peered out from pouches on their parents’ backs.

Dragon Father unleashed a mighty roar that rocked the chamber. The jabber ceased and from smallest to largest, everyone focused their attention on the king of all earth dragons. A blur of shimmering peacock blue popped up from amid the Council, swooped over their heads, and plopped down on the shelf in front of them. Dragon Father lowered his large head, stretched his neck across the open space, and peered through hooded eyes at the adolescent Earth Dragon, who straightened his spine and smiled.

With the claws of his right front leg curled over his left, the small Earth Dragon bowed his head. Eager to show his comprehension of Latin, Gwalchmai said, “Yes, Dragon Father, I am ready.”

The instant Dragon Father resumed his perch, Gwalchmai lifted his peacock blue head, while the green and gold scales on his tail glittered as it curled and uncurled with anticipation. This was the final night of the confabulation. Previous evenings had been devoted to poetry and music, magic and masquerades. But tonight a unique competition of riddles and conundrums would test the dragons’ mental prowess against Myrddin, a wizard with respect for nature and dragons.

“Kee, kee, kee.” The bird’s high-pitched call reverberated through the cauldron. A bluish-silver falcon, with reddish-brown spots on its white breast, glided to the open floor directly between Dragon Father and his Council. When the falcon settled on the polished stones, it transformed into an old man. A brimless leather cap crowned his head, and his white beard, speckled reddish brown, flowed over his blue-gray robe almost to his knees. He opened his hand to reveal a radiant star ruby the color of blood with a tinge of blue, which he offered to Dragon Father. “A gift.”

Dragon Father plucked the giant ruby from the wizard’s hand. “It is a rare beauty and a gem I shall treasure. Thank you, Myrddin.” After adding it to the hoard, he clasped his front paws under his chin and asked, “Are you ready for my riddle?”

The wizard nodded, then tilted his head and placed a finger on his cheekbone as three others curled at his chin.

In a dulcet voice, Dragon Father posed his conundrum.

“It is cold and it is hot
“It is white and it is dark
“It is stone and it is wax
“Its true nature is of flesh
“And its color is red.”

Mryddin absently stroked his whiskers as he mumbled the riddle over and over. He alternated between pinching the top of his nose and rubbing his chin. He walked in a circle with the sleekness of a cat. Once or twice he looked about to speak, then shook his head and resumed his contemplation.

“What is it, Myrddin?” Although whispered, Dragon Father’s question reverberated through the grotto.

The wizard tugged the sleeves of his robe. His lips twitched into a confident smile. “A man’s heart.”

Gurgles, howls, and squawks greeted the answer. Gwalchmai’s eyes grew round and his jaw dropped.

“You are right, Myrddin.” Dragon Father sat back on his haunches. His right paw curled over the stalagmite that served as an armrest to his throne. He extended his left foreleg toward the wizard. “To guess correctly deserves a prize, and so, I bestow upon thee the singular title of Lord of the Dragon.”

Myrddin bowed. “I am most honored, Dragon Father.”

“And have you a riddle for us, my lord?”

The shrewd wielder of magic nodded. He rotated in a slow circle so all heard his puzzle.

I know! I know! Gwalchmai yearned to share the answer, but it would be rude to blurt out the solution before the older and wiser dragons. He tapped his foot, scowled, crossed and uncrossed his forelegs, but not a single dragon spoke. Gwalchmai puffed out a loud breath.

Myrddin whirled round and pointed at Gwalchmai, who gulped under the gaze of hundreds of eyes. He hated being the center of attention and tried to withdraw into the midst of the Council, but the taller dragons closed ranks against his retreat and seemed to push him forward until he tumbled from the shelf into the center of the floor. A ray of sunlight peeked through the smoke hole illuminating him for all to see.

“Do you know the answer to the Lord of the Dragon’s riddle?” Dragon Father asked.

“Ye . . . yes.” The word sounded more like a mouse’s squeak than a dragon’s roar. Gwalchmai cleared his throat. “He speaks of a shadow.”

“You are right,” Myrddin said. Well done, Gwalchmai! Your mind is as sharp as the sight of the bird for which you are named.

Gwalchmai squeezed shut his eyes and trembled. How did the wizard know his true name – a name only he and Dragon Father knew? With such knowledge Myrddin had the power to control him. The rapid beating of his heart drowned out the barks, growls, and warbles of the other dragons. When Dragon Father spoke, a heavy feeling settled in Gwalchmai’s stomach, as if he had swallowed stones that weighted him down.

“You are indeed wise, Myrrdin. You stumped all but one of us, and for that I grant you one boon. What shall it be?”

Still pointing to Gwalchmai, the wizard said, “Allow this dragon to come with me.”

Dragon Father conferred with his Council. Beads of sweat dripped from Gwalchmai’s brow. His tail quivered. He belonged here with Dragon Father, not out in the world where some men paid others to hunt dragons.

After Dragon Father resumed his perch upon the domed rock, he said, “The request is unusual, but granted. He may stay with you, Lord of the Dragon, until I call for him.”

Want to buy the book?  Of course!  Buy an autographed copy here

And Abigail's riddle? It is the clue to a treasure trove.  See if you can solve it.

With sugar and rice and apples I'm nice
Although I am wood, I taste very good
When I am high, all sails fly
When I am low, search for a blow.  What am I?

Posted by World of the Written Word at 12:19 PM
Email ThisBlogThis!Share to TwitterShare to FacebookShare to Pinterest