POWER OF THE DOG 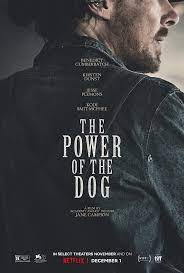 The Power of the Dog was in local cinemas for a few days.  Friends who went to see it have come back bemused, all very curious to know what I might think of it.  So this is my answer to them.

There are good reasons for seeing it.  It has had rave reviews from all the important critics.  And, while the story is set in Montana, it was actually filmed in New Zealand.  During the pandemic, what's more.  It was more exciting knowing that Benedict Cumberbatch was stranded in our country, than knowing that Google billionaire Larry Page was here, believe me.

As I have poor eyesight, and dread being trapped in a dark cinema, I was happy to wait for Netflix.  And that was lucky, because I found I could watch this film for only short spells at a time.  Nothing to do with my sight; just that I found it slow and, at times, grueling.

The cinematography is amazing.  Astounding.  Yes, I do know that our country is photogenic, but the lingering shots were stunning.  Beautifully composed and shot.

The acting was equally great.  Benedict C turned in a truly compelling performance as the main actor, and the other three major characters were excellent.

But the story did not seem to merit the huge talents employed in making the film.  In a nutshell, it is about a cowhand struggling with his homosexuality, and taking it out on anyone and anything within yelling range.  Including his poor horse.  When he called her a bitch and whipped her, it was very hard to take.

The people around this foul-tempered cowhand suffered, too, even if they were simply in the same room.  This brought back a bad memory. Quite some years ago, Ron and I were in a restaurant in Sacramento, CA, where there was a table of men -- some kind of stag do -- where one of the men was in a black rage.  Waitress after waitress was reduced to tears, and everyone at the other tables, including ourselves, felt the brunt of it, too.  There is a very similar scene at the start of this movie, which did not make me feel any sympathy for the cowhand, at all.  So, for me, it was a bad beginning.

From then on, the black rage (pictured rather too compellingly by the very, very gifted Benedict C) was turned on (a) the horse (b) the cowhand's brother's new wife, who is reduced to a quivering alcoholic, and (c) the new wife's son -- who wreaks revenge for the bullying (though he is probably homosexual himself), by murdering the cowhand in a peculiarly scientific fashion, as an objective study in medicine.

It is perhaps one of the cruelest ways possible of popping someone off.   Cruelty, in fact, is the motif of the story.

Go to see it, if you enjoy wonderful camera work and outstanding acting. But be prepared to be repelled.

Posted by World of the Written Word at 12:57 PM
Email ThisBlogThis!Share to TwitterShare to FacebookShare to Pinterest