The future for Peking 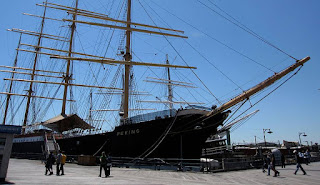 Built in Hamburg, Germany in 1911, the mighty four-masted barque “Peking” is docked at the South Street Seaport in New York City, where the tall ship is used as a maritime museum. A steel-hulled four-masted barque, “Peking” was part of the so-called Flying P-Liners of the Hamburg shipping company F. Laeisz, it was one of the last generation of windjammers used in the nitrate trade and wheat trade around the often treacherous Cape Horn.

Now, the famous tall ship will be returning home. On 12 November 2015, the budget committee of the German German Bundestag decided to purchase the ship and to return it to Hamburg. It is going to be a part of the announced German Port Museum in Hamburg, for which 120 million euro were allocated. Hamburg’s Bundestag members Rüdiger Kruse (CDU) and Johannes Kahrs (SPD) significantly promoted and supported the project in the budget committee.

With the establishment of a German Port Museum in Hamburg, a vision pursued for long by Hamburg’s locals and politicians will finally become true. The city of Hamburg with its international sea port will thus be given a spectacular showcase for its significant economic and cultural history. With the granting of 120 million euro, the museum will be fully financed by the federal budget.


The Economic and Cultural History of the Port

Upon completion, Hamburg will cover the operating cost of the Hamburg Port Museum.. “The support of the federal government for the Hamburg’s culture is a great appreciation of the performance of the city’s cultural institutions on a national and international level”, said Barbara Kisseler, Hamburg Minister of Culture. “The establishment of a national museum reflecting the importance of the Port of Hamburg gives us the opportunity to present the economic and cultural history of the Port of Hamburg in a wider context. Now , all partners in the project will have to develop a viable concept, illustrating the complex maritime history in an exciting and multi-faceted way”, continued Kisseler.

“For Hamburg and its historic museum, building a national port museum is a unique opportunity. Finally, a place can be set up, where the exciting and important layers of global trade connected to the largest German port can be displayed and explained”, rejoiced Börries von Notz, director of the Foundation HistoricMuseums Hamburg.

“With the more than 500,000 objects on the economic and cultural history of the port that have been waiting for years in the depots of the Foundation Historic Museums Hamburg to be shown, a rich collection is available to display the history of the port with its significant economic and urban history and its international relations to visitors from all over the world in a modern and exciting way.”

As a city that has been a symbol of trade and shipping for centuries, Hamburg is the perfect place for the German Port Museum. “There is hardly a better place for the port than being located right in the middle of Hamburg’s bustling port, the gateway to the world”, says Rüdiger Kruse, CDU, Rapporteur-General for Culture and the Media in the budget committee of the German Bundestag.
Posted by World of the Written Word at 10:43 AM
Email ThisBlogThis!Share to TwitterShare to FacebookShare to Pinterest